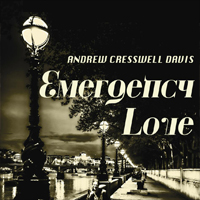 ANDREW CRESSWELL DAVIS formed STACKRIDGE when he was only 18 recording 5 albums over 6 years with the fifth album “The Man In The Bowler Hat” being produced by Sir George Martin. When he first set foot in London in the early 70’s he found himself playing acoustic guitar on JOHN LENNON’s “Imagine” album. In 1978 he formed pop duo THE KORGIS with James Warren and achieved two notable hit singles “If I Had You” and “Everybody’s Got to Learn Sometime”.

Since then Andrew joined TEARS FOR FEARS playing keyboards live, touring with JULIAN COPE on the “World Shut Your Mouth Tour” as well as playing live with BILL NELSON and more recently GOLDFRAPP.

Having released in 1990 his first critically acclaimed solo album “Clevedon Pier” he has now recorded an absolutely stunning album with a mixture of pop, rock, roots and some classical influences. The album “Emergency Love” is based around great songwriting and strong vocals.

'Ghost Of Love' starts with a vocoder and is accompanied by strings, a composition that lives as a drama, with remarkable vocal work. An incredible album, beautifully balanced offering us wonders, sensitivity and emotion...

Emergency Love is a gently-rocking affair constructed around the delicate songs, deft guitar and keyboards backed by a line-up including Stackridge's violinist Clare Lindley and drummer Eddie John along with pedal steel supremo EJ Cole. Songs such as 'Charlie's Dead' and 'Rain Rain Rain' show the tuneful sensitivities that Davis bought to his previous outfits, but there's a sense of coming of age on others including 'Loving You Too Long' which edges towards the likes of Randy Newman. There's often a country touch and even gospel overtones with choral backing vocals, particularly on the title track...

At first glance Emergency Love may seem, from an artist known for chopping and changing styles and approach, a little too straight forward in its ethos. However, strong songs and excellent musicianship will always shine brightly and on Emergency Love that light breaks through confidently from start to finish.

The title track itself is an excellent example of how to take a tender theme, present it in a reasonably traditional singer songwriter setting and simply allow the music to speak for itself. Whether the gentle stroll of "Downtown Lights", the understated yet insistent "Magdelene", which I could easily imagine Mark Knopfler singing, or "Charlie's Dead" which contains an authentic country rock vibe, it's hard not to get caught up in the believable manner with which Davis delivers the vocals. Add in some quite wonderful arrangements, where a deceptively simple sheen allows some seriously intricate work to feel smooth and unforced and it's no surprise everything here works so well.

The knock on heaven's door, taking a hymnal turn in the title track, may stop at the sparse skank of "Nightfishing" with its steel guitars' twang, while "Charlie's Dead" paints patinated pictures on the way down memory lane towards "Downtown Lights" - a darkened cover of THE BLUE NILE's ballad. Yet, as if to oppose "Peacock Of The Universe" referring to wisdom-preachers, who the artist hates rather than weirdos he likes, "Loving You Too Long" is a Shakespeare-citing soulful anthem which picks up where Otis' classic left off. What's left when the passion has burned, then? Look for the answer in the orchestral swell behind "The Ghost Of Love": a dramatic, if soothing, finale to a warm, welcoming record - a beacon for those who feel lonesome tonight. ****

As the leader of such sturdy English bands as Stackridge and the Korgis, Andy Davis built a career that will see him through old age with substantial songwriting royalties. Both gigs were known for their idiosyncratic approach to pop, and his new solo album strives for eclecticism within a narrower tonal range. With his hoarse voice and mid-tempos, Davis seems to be cruising, and if the tongue-in-cheek ambitions that made the Korgis such a vital addition to the new wave canon are missed, there's no shortage of great tunes and clever lines. Blues and trad are the preferred modes of presentation, but Davis's pop instincts make sure the songs are concise and the arrangements serviceable. It's what used to be referred to as a "journeyman's record," one whose merits are difficult to repeat, except that Davis has been repeating them his entire professional life.