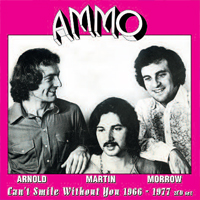 AMMO was the collective name used by gifted songwriters CHRIS ARNOLD, DAVID MARTIN and GEOFF MORROW aka BUTTERSCOTCH but that as they say is another story. The guys got together one night in 1964 when they demoed a song ultimately recorded by BILLY FURY “In Thoughts Of You” which reached number 5 in the UK charts. During the 60’s they wrote further songs for Billy Fury, CLIFF RICHARD, FRANK IFIELD and CILLA BLACK.

In the early 70’s they decided to release their own songs under the Butterscotch name and had a UK Top 20 Hit with “Don’t You Know” as well as a Japanese Hit with “Surprise Surprise”. After their brief flirtation with performing the guys went back to writing for other artists and they wrote all the singles for RESCUE Co No 1 as well as the smash hit for BARRY MANILOW “Can’t Smile Without You”, ELVIS PRESLEY. JOE BROWN, GUYS & DOLLS, CARPENTERS, ENGLEBERT HUMPERDINCK, DUSTY SPRINGIELD, EDWIN STARR to name just a few-collectively they have sold over 26 million records around the world and received the most prestigious award for songwriting, an Ivor Novello.

This 2CD set includes original versions of songs that became worldwide hits, unreleased demos and tracks that they released under the name Butterscotch and Arnold, Martin, Morrow from their most creative years of 1966 to 1977.

... the mellifluous flow of cabaret-smelling "I Believe In You" and the choir surge in "Theme From Arethuza Dustin" is irresistible. Their '60s works feel like perfect pop creations with deliberate naivete, adorably crooned in "I've Said It All Before" and the childish "World I Love You", whereas the '70s brought an orchestral sleaze, very much of its era with a guilty pleasure tinge in the unplugged swagger of "Nice To Be Home".

Still, 1968's "Another Day Goes By" arrestingly anticipates the next decade's easy listening, if moving, approach which reach a soulful silkiness in "Is It Yes Or No" and harks back to THE PLATTERS with "Three Wishes". One may wish AMMO continued as a unit longer than they did, but they did enough to be praised as genuine masters of their craft: here's the proof.

...if you think this album is all centered around a 'one hit wonder' theme think again...these two discs present a mind-boggling assortment of songs that many folks probably will have never heard before now...If you dig 1960's bubblegum and 1970's FM radio fluff, there's a good chance you'll go apeshit over this one. We certainly did!

This 2-CD set includes original versions of songs that became worldwide hits, as well as unreleased demos and tracks that the band released under the names Butterscotch and Arnold, Martin, Morrow from their most creative years of 1966 to 1977.

Predictably enough, the forty (!) songs are less rock but instead much more radio-friendly pop, occasionally drifting into a category that nowadays would be described as 'light entertainment'. It's definitely a product of its time and not all of the tracks included can be considered timeless or have stood the test of time. Nonetheless, this is a lovely trip down memory lane for those who remember all these hits but also for collectors of 60's pop.

Much of it comes as a result of a recently discovered cache of recordings - and there are some previously unreleased tracks amid the A and B-sides of singles and other cuts. The running time of two hours encompasses both effervescently breezy and reflectively maudlin songs mostly written and performed by themselves under their own names, or as the group Butterscotch. Two of the tracks also feature Tony Burrows, the king of session singers during the late 60s and early 70s.