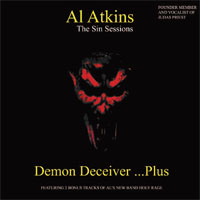 With a little help from his guitarist friends like Simon Lees(Budgie), Chris Johnson (Holy Rage), Brian ‘Am I Evil’ Tatler (Diamond Head) and Bernie Torme (Ozzy, Gillan, GMT) this Angel Air re-release is worth the money for the talent on offer here alone.

Not only does it have a great set of new hard rock songs but it also features one of Judas Priest’s classic tracks ‘Victim of Changes’ written by the metal god Rob Halford and al.

Atkins frazzled delivery combines with some consistently solid riffs to make for a decent old school metal album that will appeal to fans of both Priest and NWOBHM.

...it's the 'Holy Rage' stuff that really puts what Al has done into perspective. The two tracks are thunderous Metal at its very best...

...finally sees Al taking his place up on the pedestal of great heavy metal vocalists.

it's relentlessly, effortlessly good and tuneful and Atkins demonstrates a great form throughout. More so, with the heartbreaking seriousness of "Sentenced", and "Blood, Demons And Whiskey" featuring a multi-tracked vocals on coda he gives his former colleagues and run for their money, while "God Help Me" feels much tastier than PRIEST's recent cuts. The "Plus" part, two tracks from the veteran's new band, HOLY RAGE, including "A Void To Avoid" with Bernie Torme on guitar, only add weight to this impressive work. ***3/4

The music does nod at classic metal - Judas Priest and Iron Maiden - with Atkins' vocals a lot rougher than Halfords. If early Priest had had Ripper Owens on vocals it wouldn't be far off this.

Worth noting that 'Blood Demons And Whiskey' features guitarist Brian Tattler, and there is of course the obligatory cover of 'Victim Of Changes'. Here it is much heavier and rawer than the original, the vocals suit the heavier angle but lack the finesse or range.

Well worth a listen, but Al will always have the Priest shadow. ***/5

...a thoroughly respectable, melodic metal album with obvious links to his old band...a perfectly tasty collection suited to the nostalgic headbanger in your life.

He has a voice that sounds like it was honed by 60 Navy Cut and a gargle with meths every day...

...If you've never had the opportunity to hear Al's music then this excellent reissue...is a great place to start... classicrockrevisited.com (October 2009) ...a fine heavy re-release

...Atkins proves himself a capable metal frontman, sounding like a crossover of Rob Halford and Dave Mustaine...catchy yet powerful songs that should please just about any classic heavy metal fan