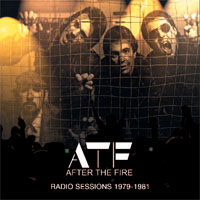 Throughout the 70’s and 80’s, radio sessions played a big part in any bands success in the UK. For AFTER THE FIRE, this was no different: the opportunity to play live in an intimate and professional setting gave the band and fans the best of both live performances and LP sound.

ATF are a rock/pop band whose roots are in the prog rock of the early 70’’s The 20 tracks featured on this CD were recorded at three different radio sessions between 1979 and 1981, a time when ATF were at their commercial peak.

Angel Air have brought the usual care and attention to the release of a live compilation set by After The Fire as they have with other artists’ releases. Commonly known as ATF, their style of music is a peculiar yet catchy style of pop and rock with nods to seventies prog which was the era they formed in...This set documents three radio sessions - 1979, 1980 and 1980 - over the course of 19 tracks on one single disc. The sound quality is surprisingly consistent and the songs are hugely likeable with lots of pomp and nifty keyboard riffs. It is a welcome release to any fans collection. ***/5

A career spanning over 30 years...a useful album which is very poppy and original in nature. Well worth a listen.

While they might not have been a household name on these shores this collection is very solid indeed and definitely worth checking out. If you’re already a fan you’ve probably got this one on your CD rack, but if you’re new to the band I honestly couldn’t think of a better place to start than right here.