AFTER THE FIRE – Live At Greenbelt Plus 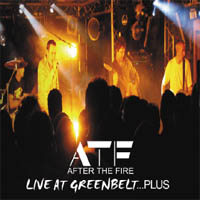 AFTER THE FIRE (ATF) roots go back to the 70’s and their eventual signing to CBS Records in 1978. They released the acclaimed album “Laser Love” in 1979 and over the next 5 years they enjoyed considerable worldwide album and single success culminating with “Der Kommissar” reaching number 5 in the USA singles chart in 1983.

After a lengthy sabbatical the band starting playing together in 1999 and in the summer of 2004 played to a capacity crowd at the Greenbelt Festival.. This CD is that concert with two bonus “unplugged” tracks.

This live set from 2004 features the band on good form, with a welcoming and enthusiastic audience present. The instrumental intro, with some outstanding work from pianist Peter Banks, is an excellent start. Influences from ELP and Genesis mix in well with the straight 70s rock/pop sound.

A couple of bonus tracks and some informative sleevenotes make for the usual Angel Air top notch packaging. Will certainly please fans and a good place to start for others too. ***

Now, more than 20 years later, we get to watch this reunion show, that goes through both periods of the band. Well filmed and recorded, the band performs quite well and the crowd is very enthusiastic. It's the kind of show that makes you say to yourself 'I would have liked to have been there'. Well Live At Greenbelt makes it almost possible. Recommended indeed!

Two unplugged bonus tracks are included on the CD, Forged From Faith and Who's Gonna Love You, both of which are given the full electric sound in the live recording.

...a pile of fast catchy songs that perfectly captured the cooler side of punk as typified by bands like Blondie and the Police...This record is ample proof that After The Fire are back with a bang!

This is a band having fun in front of a crowd doing the same...The 'plus' part of the CD are two acoustic versions of 'Forged From Faith' and 'Who's Gonna Love You'.

...as this recording from the Greenbelt Festival of 2005 proves they had lost none of their ability to produce wonderfully memorable music