AFTER THE FIRE Live At Greenbelt 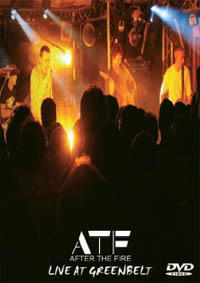 AFTER THE FIRE enjoyed initial UK chart success in 1979 with “One Rule For You” and
world wide success in 1983 with “Der Kommissar”.

Having initially performed at the legendary Greenbelt Arts Festival in 1979 they returned 25 years later marking a return to live performances. Originally filmed as a private record of the event it has now been decided to release the show on DVD as a “warts and all” official release.

Track listing includes all “the hits” and more…What a night-you had to be there!

...This is a 2 hour recording that includes a Greenbelt radio interview and an unplugged session in The Tank. The hits are included...it's always a good look back.

This is a band having a blast in front of a very appreciative audience. There is also a slide show that incorporates a radio interview and an unplugged session...Very interesting, very enjoyable, very glad that it has been released.

...it is nice to watch a well-performed concert of a band which was out of business for 25 years. The DVD gave me a nice idea how this band sounded like and also made me aware of their existence, so now I have to look for their 3 albums, which have recently been reissued on CD I believe. In the meantime, check out this DVD, which also contains intereviews and an unplugged session as a bonus, making it a 2 hours counting must-have for fans of early 80s Sympho and all fans of AFTER THE FIRE. (Points: 8.3 out of 10)