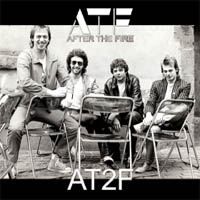 1982 was to prove one of After The Fire’s busiest years since signing to CBS Records in 1978. With three major support tours with ELO and Queen in Europe and a mammoth trek around the US and Canada opening for Van Halen it is extraordinary that not only did they record and mix their worldwide hit ‘Der Kommissar’ in between all this ‘hectivity’, they also booked Eastbourne’s ICC Studio 2 to lay down ideas for their next album ‘AT2F’ However the band split up in 1983 and the album was never released until now.

Mixed back at Peter Banks’ own studio these are the results, capturing what the band did best, playing live and enjoying themselves!

Well packaged with extensive notes and band photos do make for a good package that will please fans.

This is ATF at their classic best, with their 80s lineup of Peter Banks, Andy Piercy, John Russell and Peter King. Energetic, powerful, no messin' — an album to keep playing and to pump up the volume on… 80s new wave at its best.

Overall though this CD covers most of their musical styles, and I found it to be an interesting CD to listen to, being heavily into ATF at the time, and even now if I still listen to them a lot. I suppose that a lot of people will think that this is a CD for die hard fans only, but I think it’s better than that. Definitely worth a listen. If you do a search on Myspace for them there are some tracks and video that you can peruse to give you an idea of what it was all about. 8/10

Andy Sayner, Never For Nothing (December 2006)

Overall, if you bear in mind that this is simply an interesting curio with patchy sound quality, it'll appeal to established fans of the band who wondered what might have happened next.

Four bonus tracks are included with a 12 page booklet with rare unseen photos.

The accessible, mid-tempo yet energetic songs are drenched with new wave aspirations, and offer straightforward, clever lyrics, sounding like a blend of The Alan Parsons Project, Manfred Mann and Van Halen... 6/10