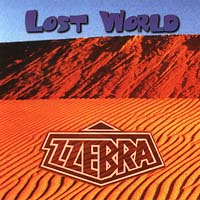 ...musically very hard to describe, in your local record store File under? 'No Point' starts things off nicely with a jazz/funk effort, but what impressed me most were the vocals - impressive stuff! 'Society' rocks things up a little, cool music with some great percussion...The quality of the live tracks is very good. 7/10

The previously unreleased album from 1975. features Liam Genocky and Steve Byrd (also later of Gillan fame) in a septet playing a variety of rock styles, covering the best of white and black music of the era...an enjoyable if eclectic concoction.

Somewhat freeform in character, the keyboards provide the springboard for Zzebra to lay down some tasty, languid and, at time, funky rock. Fluid, expressive, progressive rock that shifts in feel and form - making for an intriguing listen.

…there is a sense of adventure the size of an interstate running through the band's musicianship…Eight studio recordings and four live cuts from a 1975 European tour catch Zzebra in audacious form, pushing Lost World up among the very best Angel Air releases of the year.