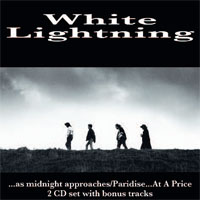 WHITE LIGHTNING were formed in 1984 (after ex members of IRON PIG placed an advert in Melody Maker) and released their first single ‘Poison Fountain’ in November that year and were soon picked up by the media with TOMMY VANCE playing their entire debut album ‘As Midnight Approaches’ on his Friday Rock Show on BBC Radio 1.

Playing live was important to the bands core and they headlined at The Marquee and went on tour supporting Meatloaf amongst others.

The band recorded their second album ‘Paradise At A Price’ in 1990 but their label Workshop hit financial trouble and the label could not afford the mixing or artwork and subsequently went into liquidation. The band then called it a day So here you have, in addition to the original album and demos, that second album released for the first time ever.

...it sets the high standards for what later would be christened 'prog metal'. Heavy and clever...3/4 Let It Rock ( www.dmme.net ) (February 2010) This is how you do a collectors edition...34 tracks in all, wrapped up in a comprehensive and informative booklet complete with rare and previously unreleased photographs...Angel Air Records have outdone themselves with this release and have set a new benchmark for the rest of the re-issue labels out there...5/5 www.myglobalmind.info (March 2010) As Midnight Approaches...received some positive press and comparisons were made with Rush's more streamlined keyboard driven sound in the mid to late 80's. 3/5 Ryan Sparks, Sea of Tranquility (April 2010) ...the real deal, a pukka 24 carat blues based heavy rock band whose lack of exposure demonstrates how important is plain old good luck. TNT Audio www.tnt-audio.com (April 2010) In short, it's the band's musical history in a neat package, with sleevenote history and band pictures. Classic Rock Society (April 2010) This double CD set is a special release indeed. It will appeal equally to fans as well as those that missed out on the band first time around...With a total of 34 tracks this set is ridiculously good value... Jeff Perkins, Eurorock (April 2010) ...in their day, they produced some cracking music that reflected the slightly more commercial end of the NWOBHM (New Wave Of British Heavy Metal) including a Rush flavouring which may attract fans of that group to investigate further...The real find of this package is the unreleased second album, from 1990, 'Paradise... At A Price', droppedwhen the label went bust. This second release is heavier than the first, with more drive and power than the debut. Also featuring demos plus a live track, this is a recommended rarity for students of British rock. A great value for money package from Angel Air - kudos to them for saving this music from oblivion. Hi-Fi World, (June 2010) This double CD ventures into the world of the mixed up 80's with rock, metal, thrash and glam battling it out for supremacy and unfortunately White Lightning I feel missed the boat. Should they have appeared in the late 70's early 80's the genre would have been a perfect fit to the classic rock around at that time. As a double CD pack goes, this is value for money as Paradise at a Price was never released and both CD's contain demos and live performances. Good solid rock music at its best. 8/10 Tony Watson, www.metalliville.net (June 2010) ...As Midnight Approaches is, without any exaggeration, an undiscovered gem of British metal...The second album...misses the urgency of the first one and sounds a bit more like typical '80s blues metal...and still it is of the highest quality. www.maelstrom.nu (September 2010)