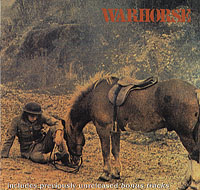 Warhorse’s first album was released in November 1970 on the Vertigo “swirl” label. The band had been formed in 1970 around the bass player Nick Simper who was one of the founder members of Deep Purple.

He was joined by guitarist Ged Peck and drummer Mac Poole who had  both played with Simper in Marsha Hunt’s backing band. On vocals, Ashley Holt was an old friend of Simper’s and had actually auditioned for Deep Purple as early as 1968. Frank Wilson on keyboards completed this line-up.

The bonus tracks on this CD include Warhorse’s demo from April 1970, “Miss Jane”, and live versions of some of the album tracks.

The music of Warhorse sums up early-Seventies heavy rock with echoes of Purple, Sabbath and early Yes.

...in November 1970, a new album came along that you just knew was destined to fulfill every last vertiginous criteria for which Vertigo was renowned. It was by Warhorse, and boy, it was heavy! The fun faded in on neoclassical Hammond organ, a dark lilt that sounded as though it was recorded from an immense distance - so immense that when the rest of the band burst in, just under a minute into the melody, even the phonograph needle jumped in shock... The connection to the Purple family tree remains most people's immediate introduction to Warhorse today...contemporary reviews would most commonly compare Warhorse to labelmates Black Sabbath. In fact modern ears will discern more resemblance to (Nick) Simper's old buddies in Deep Purple...almost everything that Purple would accomplish on 1971's Fireball and beyond was already in place in 1970, courtesy of Warhorse... Dave Thompson, "Goldmine" 26.2.99 Angel Air continue to release material by 'obscure' artists, all superby packaged with extensive sleevenotes explaining what great controbutions these acts have made to rock history...The surprising aspect of this release is that the music is rather good. Warhorse's debut LP mixed lots of Hammond organ and drum rolls with both rough and operatic vocals Five bonus tracks (four live) and copious sleevenotes from Simper complete the package. 'Red Sea' continued the formula, with plenty of fuzz guitar anfd keys, plus a more melodic approach than some of their contemporaries. Yet more unreleased live and demo tracks are again included...it's easy to see why these original LPs have such a hefty price-tag. Joe Gleesin, Record Collector (January 2000) In a brief, four-year existence, they released two albums imbued with a zestful spirit of the age, yet also ahead of their time. The self-titled debut (originally released in 1970) is especially impressive, showcasing some monumental strokes of near genius, while there's enough fire and passion on "Red Sea" (1972) to suggest their demise was premature. Both albums have bonus tracks and are worthy of a place in any Classic Rock reader's collection. Malcolm Dome, Classic Rock (January 2000) ...Not only for nostalgic value or family tree ties, these albums would, and should, sit next to your Purple collection, excellent stuff, and once again thanks to Angel Air SC Rocks(April 2000) Contained on this, the group's debut and neonate form, are every snarl, swagger and pose of the hard rock generation and it is time that the rock and roll history books recognize such facts...There are ample liner notes and photos that serve as a guide through the life and times of the group...The history is great but the music is what makes this an absolutely essential addition to your collection. "On The Record" Music America magazine The music is early 70's heavy rock with acid guitar work mixed with lots of Hammond organ…The album is as good as the early Deep Purple albums and should be a part of any Classic Rock and Deep Purple fan. This is essential stuff. Greger Rinnqvist A period piece, redolent of rock of the day, with those last demos and a live track amongst six bonuses, this is an enjoyable and nostalgic canter back to hard rock heyday. ***½ Peter Muir www.getreadytorock.com (November 2006)