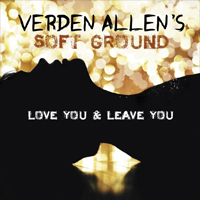 VERDEN ALLEN founder member of MOTT THE HOOPLE has since the 2009 Mott The Hoople reunion (of which he was the driving force in facilitating) been working with his band SOFT GROUND on the live circuit.

Having released solo albums over the years he has now returned to the studio to record a rock album with a full band sound whilst showcasing the swirling Hammond Organ, honed song writing skills and his striking vocals that are his trademark.

‘Love You And Leave You’ is an excellent mix of rock tracks and ballads and will appeal to both his existing fans and those who are curiously open minded.

The audio clip is an edit from a promotional campaign for Angel Air Reciords on Get Ready to ROCK! Radio in January 2013.

Thirteen tracks of damn fine hard- and power-rock make this album a compulsory purchase for all those who appreciate quality and bona fide musicianship.

Love You & Leave You is actually a pretty fine album that any fan of '70s rock should enjoy. Verden Allen has assembled a top notch band here, so for all you fans of Hammond organ & guitar drenched rock & roll, dig in deep.

...there is something warm and endearing about the distinctive vocals and the sound of a swirling Hammond. I'm sure Mott fans will be intrigued enough to check this out because there are one or two moments when Allen's playing shines through that are reminiscent of his former band, and some of the song structures are definitely a walk down familiar roads.

File under easy on the ears hard rock and one to go back to, I think. A possible rough diamond.

To put it shortly, those thirteen tracks of perfect hard-power-rock are a must for everyone who values quality music.

Thirteen tracks of damn fine hard - and power-rock make this album a compulsory purchase for all those who appreciate quality and bona fide musicianship.

...the swaying sentiment of "Knocking On Those Old Back Doors" turns all the right knobs, whereas "Do You Want Me 2?" merrily sprinkles the charge with a piano boogie, and "Hold On To This" elevates this collection to wuthering, or thunderbuck, heights. Here, Verden Allen is truly walking with a mountain and shakes the common ground.

…an interesting mix of eclectic rock and power-pop…Imagine the poppier end of Buggles or Hawkwind, mix in the 'Hoople. and you get a set of strange yet enjoyable pop-rock tracks. Joe Geesin, Record Collector (September 2002) …if this album was listened to without any knowledge of who was playing I am sure the listener would pick out many similarities with his old band… Feedback (August 2002) A great rock album with, of course, distinct Mott overtones, its 10 songs are all recent Allen originals and won't disappoint anybody enthralled by the earlier Long Time No See and For Each Other albums or even by his long-ago contributions to Mott's own songbook. Jo-Ann Greene, Goldmine (September 2002) ...quite a laid back approach with some lovely melodies Modern Dance, (Issue 41 November 2002) …the kind of adult contemporary rock record that needs to be heard. His confident brand of mid-tempo organ and piano driven tunes are of the brand that only requires a few listens to carve a niche in your musical memory. Jeff Monks, Mohair Sweets (November 2002) …it is a showcase, not only for his keyboards and song writing skills, but also his rather distinctive singing... Bernard Law, Classic Rock Society (Nov/Dec 2003)