VERDEN ALLEN – My Masochistic Side 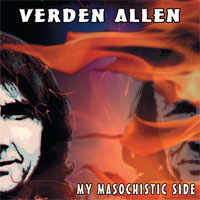 VERDEN ALLEN shot to fame as a founder member of MOTT THE HOOPLE and he will perform as part of that legendary band in October 2009 when the original five members reform to play to 5 sell out nights at HMV Apollo, London.

His new solo album highlights once again Verden’s honed song writing skills as well as his trademark Hammond Organ aimed at all fans of good rock music. The swirling Hammond Organ and striking vocals shows how fundamental he was to the success of Mott The Hoople.

This album is a good mix of rock tracks and ballads and will appeal to both existing fans and those who are curiously open minded.

If Hunter has always proudly worn Dylan's locks on his sleeve, the singer's ertswhile colleague's love for His Bobness has never been more obvious than on this, the organist's fourth solo album. www.dmme.net (July 2009) ...Mott The Hoople fans will enjoy this one, and it's well-timed if they're craving new material in the band's style in anticipation of the reunion shows. www.e-gear.com (July 2009) The retro rock mix is good, melodic and really worth a listen. Joe Geesin, www.getreadytorock.com (July 2009) Allen handles all the instruments on this ten song outing and the atmosphere surrounding these tracks is generally lighthearted and fun. Standout tracks include “Apollo 09” a song dealing with the reunion shows in which he proclaims that all he wants to do is "Get pissed and just get stoned and enjoy myself". Ok fair enough so no lofty ambitions here but I’m sure his tongue is planted firmly in cheek... Ryan Sparks, http://www.classicrockrevisited.com (August 2009) ...it's his organ playing that drives his song writing and he can write songs...there's a lot of Mott in this album... Any Mott the Hoople fan should like this... Amplifier (September 2009) ...serves to remind that his Hammond organ...and wail of a voice...played a key part in trademarking (Mott the Hoople's) sound... Peter Muir, Rock N Reel (September 2009) The sound is full bodied and Allen's vocals are reminiscent of founding Mott vocalist Ian Hunter www.mwe3.com (September 2009)