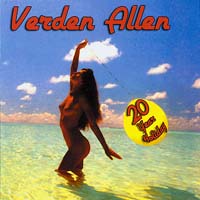 Founder member of MOTT THE HOOPLE VERDEN ALLEN spent the best part of 2001 recording his third solo album which highlights both his keyboard playing and songwriting talents.

This album was written, produced and performed by Verden at his South Wales studio. It evokes memories of classic Mott The Hoople whilst also offering 21st century contemporary numbers.

…an interesting mix of eclectic rock and power-pop…Imagine the poppier end of Buggles or Hawkwind, mix in the 'Hoople. and you get a set of strange yet enjoyable pop-rock tracks. Joe Geesin, Record Collector (September 2002) …if this album was listened to without any knowledge of who was playing I am sure the listener would pick out many similarities with his old band… Feedback (August 2002) A great rock album with, of course, distinct Mott overtones, its 10 songs are all recent Allen originals and won't disappoint anybody enthralled by the earlier Long Time No See and For Each Other albums or even by his long-ago contributions to Mott's own songbook. Jo-Ann Greene, Goldmine (September 2002) ...quite a laid back approach with some lovely melodies Modern Dance, (Issue 41 November 2002) …the kind of adult contemporary rock record that needs to be heard. His confident brand of mid-tempo organ and piano driven tunes are of the brand that only requires a few listens to carve a niche in your musical memory. Jeff Monks, Mohair Sweets (November 2002) …it is a showcase, not only for his keyboards and song writing skills, but also his rather distinctive singing... Bernard Law, Classic Rock Society (Nov/Dec 2003)