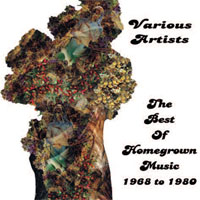 BRIAN CARROLL started out in the music business as an office boy for the New Musical Express back in 1962 and quickly moved to TRANSATLANTIC RECORDS where he developed his production skills working with GUS DUGGEN.

He then moved to the infamous IBCSTUDIOS, London where he teamed up with DAMON LYON SHAW and quickly formed JOINT PRODUCTIONS (which very soon became HOMEGROWN MUSIC when certain ‘oldies’ in the record business thought the name had something to do with an illegal drug that was about to change the youth of the day).

The duo recorded their first band FACTORY and the track ‘Path Through The Forrest’ originally released on MGM is now much sought after and changes hands at £650.

Brian has put together this compilation, written the sleeve notes and produced the track by track notations.

...if you don't have the Factory and Five Day Rain stuff already, go and grab this... Shindig magazine (August 2010) Angel Air Records, like they've done so often in the past, have done a bang up job putting together this compilation of long lost treasures...if you're a fan of somewhat obscure British classic and progressive rock, then this one is definitely worth checking out. www.seaoftranquility.org (October 2010)