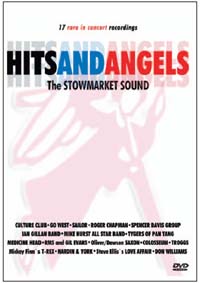 The Stowmarket Sound? Well not really. Stowmarket, a sleepy market Town in the English county of Suffolk is the home to Angel Air and that is where all the DVD clips originated from either by filming artists in concert as in the majority of cases or Licensing in entire concerts for DVD release.

This release is the 20th scheduled release from Angel Air so they have included one track from each of the previous releases from household names such as CULTURE CLUB, GO WEST, IAN GILLAN BAND, SAILOR, DON WILLIAMS and COLOSSEUM to name just a few.

A superb collection of rare in concert footage by some of the biggest names in popular music. Performing their HITS and best known songs. Music from the Angels

...there are some wonderful performances on here...an interesting collection, and certainly an easy way to check out what Angel Air have to offer.

...live performances from an interesting and diverse list of artists...a fine compilation of archive footage.