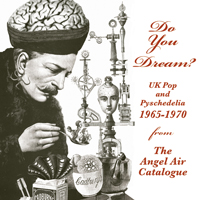 Compiled by Stefan Granados (Shindig) with tracks drawn from the ever expanding UK ‘heritage’ Angel Air label who, since their inception in 1997, have developed a catalogue of much sort after original recordings from the 60’s to 21st Century. With new additions for this compilation supplied courtesy of Phillip Goodhand-Tait (CIRCUS) and Mike Hurst (DOUBLE FEATURE).

This release focuses on tracks drawn from the classic popular music years 1965 to 1970 and the album opens with ‘Walkin, Walkin’ a freakbeat classic written and produced by Mike Hurst in 1966, moves to THE TREACLE from Hull featuring one MICK RONSON who recorded in 1965 ‘Stop Get A Hold Of Yourself’ and finally to ATOMIC ROOSTER’s original demo of their anthem ‘Devils Answer’ recorded in 1970.

Classic tracks from a classic label.

Plundering the Angel Air archives for what, thanks to the label, aren't rarities anymore, it welcomes in a few previously unreleased tracks to tie up the loose fringe of the almost underground scene with quite a few family connections... www.dmme.net (June 2010) ...half-forgotten gems that also benefit no end from the rather nifty remastering...an eminently playable set which doesn't work on paper but sounds great to these ears. Shindig magazine, (June 2010) I dare you to listen to this CD without breaking into Austin Powers-style dancing...this is the real deal-authentic, groovy, trippy, dippy hippy music from the late 1960s from British bands... www.e-gear.com (July 2010) ...an intriguing collection that brings together twenty one rare and classic pop and psychedelic nuggets recorded between the years of 1965 and 1970...a very solid overview of a particular period of music from the Angel Air archives...excellent introduction to what the folks over at Angel Air are all about. www.seaoftranquility.org (July 2010) ...Angel Air has built a sturdy catalogue of lesser-known psych and 60s pop, from which this 21-track collection compiled by Stefan Granados is drawn... Record Collector (July 2010) Devotees of the obscure and unjustly overlooked should find much to entertain them in this fascinating new Angel Anthology... Kevin Bryan, Stirling Advertiser (July 2010)