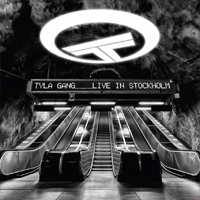 TYLA GANG were formed from the ashes of DUCKS DELUXE (which SEAN TYLA had formed with Nick Garvey) back in 1972 and they immediately signed to STIFF RECORDS and then with legendary Californian label BERSERKLEY. The original band broke up in 1979 but in 2010 the original line-up reformed with the later addition of JOHN McCOY (Gillan/Mammoth).

On Sunday March 13th 2013 the band played to a sell-out audience at Akkurat Bar, Stockholm which is a regular call on any Tyla Gang Tour. Sean Tyla said “Live albums need two vital ingredients, a great audience and a great engineer. As a cold north wind blew in from the Russian Steppe, the heat in the kitchen was rising. The crowd were awesome and the band responded in kind-the music tells the story. This recording wasn’t dragged into the studio and edited to death. It is what it is-gory and good-as great rock’n’roll should be”.

Do yourself a favour and check out this release and then try to catch this band live if you can.

...Tyla reformed the band with their original line-up in 2010, recording this energised live set in a Stockholm bar three years later, where he regaled his adoring audience with old favourites such as 'Styrofoam', 'Dust On The Needle' and 'Hurricane'.

The relentless drive of 'Suicide Jockey' (great drum work by Michael Desmarais) and the thunderous, sonic blaze of 'Hurricane' once more prove that the Tyla Gang are one hell of a energetic live band that knows how to transmit this energy to their audience. Blistering solos, and a great vibe make this a fantastic live album, with the hilariously titled, stomping 'Texas Chainsaw Massacre Boogie' the crowning glory of it all. Ka-pow!

Live albums aren't always the best introduction to a band, but if like me, you haven't encountered Tyla Gang before, prepare yourself for a party of leg juddering, knee buckling, ear rejoicing proportions and really, what more could you need?

These twelve tracks sizzle with all the spontaneous excitement of a dynamic rock show played by professionals. The sound is big and the playing is super tight. Hard rockers included in the set are "Cannons Of The Boogie Night," "Dust On The Needle," and "Texas Chainsaw Massacre Boogie."