TYGERS OF PAN TANG Visions From The Cathouse 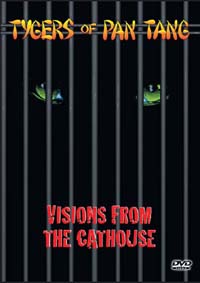 Formed in Whitley Bay, England during 1978, The Tygers of Pan Tang were created by guitarist ROBB WEIR who at the age of 17 decided that his chosen profession of jeweller would have to be put on hold whilst he made more public use of his guitar and Marshall stack that were adorning his bedroom.

After playing locally they were signed by a local label Neat Records before being re-signed to MCA and in 1980 they released their debut album “Wild Cat” which is still regarded as a landmark of the NWOBHM genre. 1982 saw the release of “The Cage”. Two further albums followed and in the late 80′s the band was put on “hold”. Fast forward to 1998 and after a request to play at the Wacken Festival, Germany Robb reformed the band and this DVD shows them at their best-playing live.

Tygers of Pan Tang have now returned to the studio to record a new album for release autumn 2003 and will be touring the UK during June in a NWOBHM tour alongside Oliver/Dawson Saxon and Girlschool.

...The question is whether the power, energy, and sheer exhilaration comes over when transferred to disc, and the answer is a resounding yes!

These five typical Englishmen play a lot of what I wanna hear and in a way that brings enormous 80-ies vibes. Included are also a promo video of "Mystical"..., and an almost 25 minutes interview with Robb Weir. It all provides insight as to the magnitude of TYGERS OF PAN TANG during the first half of the eighties. Robb´s dedication to the band is really still present...get this DVD.

If you're among those who feel that bands such as Tygers Of Pan Tang are best left in the past, then this surprisingly entertaining DVD of a recent show may go a long way to changing your mind....Guitarist Robb Weir is the sole survivor from those semi-glory days, and he's assembled a very decent 21st century version of the band, with frontman Richie Wicks proving an adept successor to both Jess Cox and Jon Deverill....There's bonus material...but the main thrust of this footage is nostalgia. And the Tygers offer that in abundance.

...this DVD called ‘Visions from the cathouse’ is a very interesting DVD to check out, as it features a concert the band did not that long ago with the new lead singer. The band made a nice collection of old and new songs, from the first period (1979-1983) and the current period (1999-2003), with the addition of 2 covers (the Tygers classic “Love potion no9” and TED NUGENT’s “Cat scratch fever”). Most notable fact is that 4 completely new songs were played during this concert, so it is very interesting to check out if you’re a dedicated fan of the band.

Between the songs of the concert, there is some video footage of the band in the studio, where they are recording their new CD (which is also titled ‘Visions from the cathouse’ I believe). Those 4 newly played songs are “Bad bad kitty”, “Cybernation”, “Running man” and “Deja Vu”, but still the older tracks are showcasing the band’s finest moments (“Lonely at the top”, “Paris by air”, “Take it”, “Hellbound” and “Don’t stop by”). The DVD also contains a very nice interview with the only original member (Robb Weir) and it’s funny to see that at one point (in 1985) there was a line-up of TYGERS OF PAN TANG that didn’t include any of the members of today’s line-up, which is quite bizarre and unique for a rock’n’roll band. Anyway, another extra is the video clip of the song “Mystical”, which has been re-recorded with the new singer as well. So there you have it, a very impressive DVD of one of the first (and still surviving) bands from the NWOBHM scene! (8.5/10)

This is a hard rock band, nothing more or less, with some classic songs and a great vocalist in Ritchie Wicks...There is also an interview with Robb(Weir) where he talks about the life of the band, as well as the promo video for 'Mystical'. A must for any fan of NWOBHM.