TYGERS OF PAN TANG – Leg Of The Boot – Live In Holland 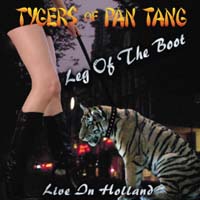 Formed in 1979 in Yorkshire the TYGERS OF PAN TANG were created by guitarist ROB WEIR who at the tender age of 17 entered his chosen profession.

Considerable commercial success was achieved in the 80’s by the band until the release of ‘Burning In The Shade’ which Weir did not feel was representative of the band and the TOPT were placed into a ‘permanent state of retirement’.

Fast forward to 1998 and after a request to play at Wacken festival in Germany the band reformed and have been playing to sell out gigs across Europe since.

This album ‘Leg Of The Boot’ was recorded live in Holland recently and some three studio bonus tracks have been included for the fans.

...finds the band in ebullient mood...the Tygers are very much a band for today and still a force to be reckoned with as this great live album proves.  Classic Rock Society (July 2005) ...You can find 'most wanted' songs like Suzie Smiled, Euthanasia, Don't Touch Me There and as bonus 3 different studio versions of the songs: Highspeed Highway Superman, Slave To Freedom, Don't Touch Me There Skylight e-zine (July 2005) ...New Wave of British Heavy Metal at its crustiest and finest... Classic Rock (August 2005) If this is a band that you have enjoyed in concert then this is something you will probably want to have as it does portray the sweat and exuberance... Feedback, (August 2005) Mixing old and new songs the performance is top-notch, pounding heavy metal with power and finesse... Hartlepool Mail (August 2005) ...a scorching set of new numbers and old faves... Jo-Ann Greene, Goldmine (November 11, 2005)