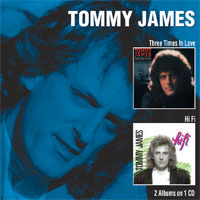 TOMMY JAMES has sold over the past four decades over 100 million records worldwide and is currently working on a Broadway Show for autumn 2011 and a major film for 2012 based upon his critically acclaimed book ‘Me, The Mob and the Music’

In 1980 he released ‘Three Times in Love’ and the single of the same name made number 19 in USA charts. Coupled with this is the album ‘Hi-Fi’ which was released in 1990. Both albums on 1 CD highlight the talents of an
artist who has had no less than 13 solo chart singles in the USA over the past three decades.

Since he burst onto the music scene in 1965 he has had 23 Gold singles and 9 Gold and Platinum albums.

...'Three Times In Love'...marries his classic '60s writing style to a new era's pop tendencies...Tommy keeps on burning still, and the "high fidelity" term can describe the man himself www.dmme.net (January 2011) ...well-crafted catchy tunes that have a timeless appeal and are aimed for the mainstream... www.music-news.com (February 2011) James' classy song structures survive the eighties synths and polite production to be thoroughly enjoyable...the sleeve notes are extensive, interesting and written with James' cooperation... Fireworks magazine (January 2011) TOMMY JAMES Re-issues Best known as the leader of American 60's band Tommy James and The Shondells, James has been making records since 1964 and post Shondells has recorded a number of solo albums. It is James' solo output that has been revisited with 5 of these albums being re-issued by Angel Air. A Night In Big City (SJPCD354) was originally released in 1996 and for the most parts has a late ‘80's feel to it - it's a slick production with stand out tracks like 'Red Headed Woman (In a Black Limousine)', 'Baby Tonight', 'In Slow Emotion' and re-workings of his earlier hit 'Tighter, Tighter' and Shondells hit 'I Think We're Alone Now', as made popular again courtesy of being a massive hit in the ‘80's by Tiffany... Then we have 'In Touch' and 'Midnight Rider' (SJPCD353) released together on one CD. In Touch was released in 1976 and finds James with a more matured voice than in his Shondells days. Covers of Suzi Quatro's 'Devil Gate Drive' and The Glitter Band's '(Do You Wanna) Touch Me' and 'I Love You Love Me Love' sound surprisingly good, and original track 'One Track Mind' fits in nicely alongside these. There is also a cover of Elvis's 'Treat Me Nice', the pop ballad 'Don't Want To Fall Away From You' and a couple of more pop like tracks. 1977's Midnight Rider is a country influenced album that does tend to feel a bit middle of the road/easy listening in places. However, 'Midnight Rider', 'Double or Nothin'', 'Still Got A Thing For You' and the Eagles meets The Bee Gees style 'What Happened To The Girl' are all worth a listen. Coincidentally, Michael McDonald and The Eagles Timothy B Schmidt make an appearance on backing vocals on the album... In 1980 Tommy James released Three Times In Love (SJPCD350), the album had a mostly ‘60's sound to it and featured an unknown Luther Vandross on backing vocals. 'You Got Me', 'Three Times In Love' and 'It's Magic' are pure ‘60's style pop whilst the slower 'Everything I am' has an air of Manilow about it. 'Lady In White' and 'I Just Wanna Play The Music' could easily be covered by Cliff Richard whilst that disco sound re-appears on 'Long Way Down' and 'Let It Slide'. The only track on the album to showcase James' rockier side is 'It's Alright For Now'. The album is packaged with the re-release of 1990's Hi-Fi, a bass and synth heavy album that has a strong late ‘80's soundtrack feel to it. The highlights here are 'Go', 'Burning For You' and 'Heartbeat In The Night'. You also get ballads 'Ordinary Girl' and 'Love You Too Much' and the'80's pop of 'You Take My Breath Away' and 'What Kind Of Love (Do You Want)'. Of the 5 albums, it is probably 'A Night In Big City' and 'Hi-Fi' that are the most consistent, unfortunately - as with many of today's chart making bands, there is an overall feeling that James' output is influenced by the current trends but I guess that is what sells records- and let's face it Tommy James has sold in excess of 100 million records since the 1960's. Nikk Gunns, www.getreadytorock.com (April 2011)