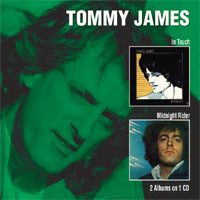 TOMMY JAMES having sold in excess of 100 million records since he burst onto the scene with his worldwide smash ‘Hank Panky’ back in 1966 released the critically acclaimed album ‘In Touch’ in 1976. This is paired with his much sought after album ‘Midnight Rider’ from 1977.Both albums were recorded in California.

Currently working on a Broadway Show for autumn 2011 and a major film for 2012 based upon his critically acclaimed book ‘Me, The Mob and the Music’ To date no less than 300 hundred artists have covered Tommy’s songs, among them PRINCE, REM, BRUCE SPRINGSTEEN, DOLLY PARTON, BILLY IDOL, CHER and JOAN JETT.

Over the years outside of Tommy James & the Shondells Tommy has achieved no less than 13 solo chart singles and platinum albums in the USA.

James might have harbored the songs for half a decade but together they create a tasty whole... www.dmme.net (March 2011) In the end these Angel Air re-issues are really targeted for die-hard Tommy James fans... grab a couple of these two ‘fer’s. Ryan Sparks, www.classicrockrevisited.com When played simultaneously, both have enough good songs and great performances to keep you interested...a worthy release. Fireworks magazine (May 2011)