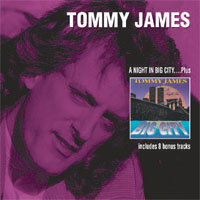 TOMMY JAMES album ‘A Night In Big City’ was recorded in 1994 and reunited Tommy with arranger Jimmy ‘Wiz’ Wisner whom Tommy had teamed up with back in the 60’s on one of his smash hit singles ‘I Think We’re Alone Now’.

The album was inspired by Tommy’s fascination as a boy growing up in a pre television age where the family radio was an enchanting source of national stories.

The complete behind the scenes story of Tommy’s career can be found in his best selling autobiography Me, The Mob, and The Music published by Simon & Schuster/Scribner.