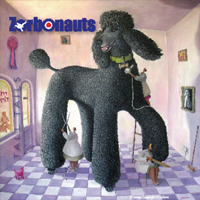 Zorbonauts first release, Tall Tails, is a contemporary look at material originally performed and recorded by Lynden, during his early Jerusalem days, which has now been turned inside-out, given several lyrical alterations, and, in the case of Primitive Man, an impressive extention.

It should be noted that the track, She Came Like A Bat From Hell, was written, performed, recorded (in 1971), and released (in 1972), many years prior to Meatloaf’s first album of a vaguely similar name.