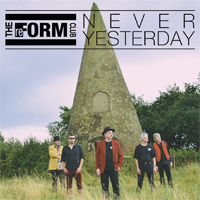 THE REFORM CLUB having released their debut album “Always Tomorrow” in 2013 to great critical acclaim now follow up with their new album of 12 original tracks.

The band’s musical influences are varied but this new album has a strong leaning to the very English, slightly quirky pop and rock from the ’60s.

Fronted by NORMAN BAKER who was MP for Lewes, UK from 1997 to 2015. His former boss NICK CLEGG Deputy Prime Minister referred to him in his MP/Minister role as a “cross between Gandhi and a battering ram”!

Norman said: “The Reform Club is delighted to be releasing its new album through Angel Air, which has a strong catalogue and whose style represents a natural home for us”.

Never Yesterday is folky: that's right, THE REFORM CLUB, a mix of folk and rock with a perfume of the sixties, but it does not lack communicative energy. From the opening track 'Daffodil Cottage' we already know we are dealing with professionals who have a sense of rhythm. All these titles are sung by Norman and his voice is strong, I do not know if he was singing at the Commons but in THE REFORM CLUB he's doing really well.

...Elsewhere, though, affairs of the heart take over foreign affairs, and little tragedies such as ones behind the whimsical "The Man Next Door" or the "One Way Love" blues are the order of the day.

In this context, acoustically driven numbers of a singer-songwriter disposition - like "Point Me To The Truth" - make a lot of sense. Not for nothing the punk defiance of opener "Daffodil Cottage" with its naked guitar riff gets diluted in the song's soft chorus and psyched-up passages, and "Shopping" is mocking consumerism in the kindest way possible - as a means for a meaningful social life.

So while the twang in "Time Hangs" sounds ominous, its refrain is a harbor of hope, and "Teapot Lane" hitches a catchy approach to criticism of today's Blighty. But then, there's luminous wisdom in the title track, a refusal to cast a glance back, just because it won't help us move on. One way love might be a step forward, really.****

Never Yesterday's meticulous political editorial makes it worth a spin, but where the album blossoms is through its inherent honesty. Love and life flutter among the words with such cordial belonging it is almost like opening a diary; and that intimacy gives this album its heart. The Badger, University Of Sussex Students' Newspaper (March 2016)

Whichever song you listen to you can be rest assured of some clever pop music that is as catchy as anything you are likely to hear this year. If you enjoy a little slice of the '60s every now and then you really can't go wrong with Never Yesterday.

Standout track Give War a Chance is an irresistible critique of Blair's warmongering, with the opening refrain "I am an envoy for peace/But I've got war on my mind/I've dealt with Iraq, I'm shafting Iran/Syria watch your behind" carrying a wholly correct prediction, chastising Cameron's bombing whist uncovering the root of the madness with a heat seeking intensity any general would be proud of. Juxtaposed to a creeping folky instrumental, Baker and Mike Phipp's lyrics are given a platform no parliamentary speech can rival.

The Reform Club also excel at old-school Rock and Roll ballads of longing and loss, with One Way Love and That Girl giving the album a genuine sense of authenticity; the former dealing with the age-old issue of loving one who will never reciprocate, the latter echoing the same notion in a flurry of minor chords and a chorus "That girl, That girl, I am in love but she's leagues above me" that is simultaneously simplistic yet byzantine...

...Never Yesterday's meticulous political editorial makes it worth a spin, but where the album blossoms is through its inherent honesty. Love and life flutter among the words with such cordial belonging it is almost like opening a diary; and that intimacy gives this album its heart.

'The Man Next Door' is a whimsical tale (told in ballad-style) about a fella called Ben who works off the Old Kent Road, claims to make a mint yet is always skint, and forever borrows a tenner of which our lyrical protagonist knows he'll never get it back. Bless the Old Kent Road and its periphery, seemingly inhabited by colourful characters worth a tale, and forever inspiring artists to write that tale. Another amusing song is 'Shopping' an urban saga about the delights and possible pitfalls any serious shopaholic might encounter.

...An excellent album for music lovers who like to be 'stimulated' while listening to songs and hey, some of the content might even spark a debate or two – no, you won't fool the children of the revolution.

They are reminiscent of The Beatles, The Kinks, etc. Tony Blair has been criticized in "Give War a Chance," with references to the war in Iraq and Iran. Something as mundane as shopping gets a slap in "Shopping". For lovers of retro pop.