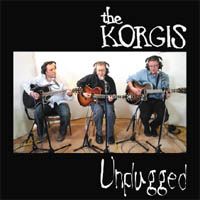 THE KORGIS roots go back to the late 70s and STACKRIDGE but over the past 25 years the band has enjoyed significant worldwide commercial success with hits such as ‘Everybody’s Got To learn Sometime’ and ‘If I had You’.

This album was recorded in the summer of last year for a film shoot and the harmonies and playing are breathtaking.

The hits are here with 'If I Had You' adapting well to the acoustic mode whereas 'Everybody's Got To Learn Sometime' lacks the big production values for me. 'That’s What Friends Are For' and 'Lines' would easily sit on daytime radio.

Recreating hits like Everybody's Got To Learn Sometime on three acoustic guitars (with a hint of piano) takes them to a simple, beautiful level often not immediately apparent in their earlier incarnation...A stylish songbook from two of Britain's vastly underrated artists.

...by simply unplugging their guitars and creating sumptuous new arrangements, The Korgis breathe such new life into these golden numbers that it's amazing how fresh they all now sound...Although it may look like just another best-of package, Unplugged actually walks The Korgis to brand new heights. A must for all fans

...the vocal harmonies on 'If I Had You' are wonderful and well worth hearing...Of course it will be to 'Everybody's Got To Learn Sometime' that most people will turn, and the version here is truly beautiful.

The acoustic versions of this simply structured, accessible songs, though a bit thin, make the songwriting shine with its bits of wittiness (such as those found on "Cold Tea," "Dumb Waiters" and "Perfect Hostess"). (5.5/10)

...there are some excellent harmonies as a feature of the music, and the instruments are always impeccably played...