THE KORGIS – This World’s For Everyone 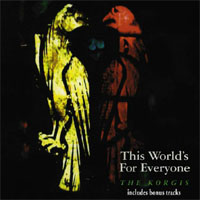 The KORGIS 1992 album “This World’s For Everyone” was released in European territories such as France, Belgium, Germany, Spain, Portugal and Holland and achieved Top 20 success in The Kiss Chart in Japan.

Sadly it was never released in the UK and now remastered with bonus tracks Angel Air corrects that issue.

Classic pop music from one of the most much loved tuneful bands ever.

From the title track, through 'Show Me' and the magnificent 'No Love In the World' ... and 'Love Turned Me Around' only the use of drum machine betrays the late-80s, early-90s origins. Just when you thought it couldn't get much better, the band roll out 'Wreckage Of A Broken Heart' and 'All The Love In The World'.

The inclusion of the 'major 'hit' and bonus tracks including the original demo for the album concept, together with Bakers' instructive liner notes, round out an excellent package. Classic pop doesn't come much better, and an almost forgotten gem shines again. Simply wonderful. *****

The production throughout is phenomenal, the sound magnificent, and the arrangements dense, but with close attention to musical details. As always with the Korgis, the strong melodies and catchy choruses reign supreme, with every song emphasizing the band's exquisite vocals and ferocious musical talent.

Fifteen years on, this superb set finally received a British release, an event celebrated by the inclusion of a previously unreleased bonus track, a pair of alternate recordings, "This World"'s original demo, and a rollicking rock & roller recorded live in 1993. A must have for every Korgis' fan, an old album that in today's climes sounds surprisingly up to date.

With a handful of bonus cuts, including the rarest of all rarities, THE KORGIS' live rendition of the "Mount Everest Sings The Blues" rockabilly from 1993, that's from the studio-only band, this CD will feel at home in every home.

One of the most haunting and melodic of pop bands...