THE KORGIS Something About The Korgis – Sound And Vision 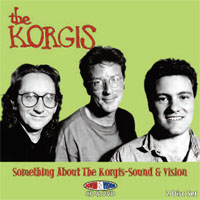 The KORGIS recorded their first album in 1979 which included the HIT single “If I Had You”. In 1980 they had a worldwide HIT single with “Everybody’s Got To Learn Sometime” which is played today regularly all over the world and has also been covered by a number of artists from YAZ to ERASURE.

This collection is bang up to date and includes the 2006 single 'Something About The Beatles.' The CD part of this set includes 15 tracks plus a further four under the heading ‘Bonus Rarities.’ The DVD is the 'Unplugged Kollection' from when the band reformed in 2005. (The CD version was also issued by Angel Air in 2006.) The DVD also includes some bonus footage such as promo videos, a documentary on the band dubbed 'Off The Leash' and a history and discography.

'Something About The Korgis' is great value for money and a wonderfully compiled set that will appeal to newcomers to the camp as much as it'll appeal to serious collectors. The sheer depth and emotion on some of these songs is incredible and well worth paying attention to. **** Neil Daniels, www.getreadytorock.com (August 2008)

Formed to be 'more commercial' than Stackridge, the songwriting of Davis and Warren shows the same quirkiness and humour, but with a radio-friendly sound that led to the hits 'If I Had You' (#13) and 'Everybody’s Got To Learn Sometime' (#5).

The CD in this package is a greatest hits collection comprising not just their UK hits (except one), but their massive European hit 'All The Love In The World' and their latest single 'Something About The Beatles'. Add to that some rare demos and remixes and it's worth getting for that alone.

However, there's also a DVD included. This has the band: Warren, Davis and John Baker performing an 'unplugged' set and promo videos along with a 'Story of The Korgis' documentary.

Leave it to an astute archival label like Angel Air to take it upon itself to revive a band like the Korgis, a deserving combo that was scarcely appreciated even in their native Great Britain... Etched in the great British pop tradition - one that relied on such esteemed forebears as the Kinks, the Hollies and naturally, the Beatles - the band carved its template from lush, effusive melodies, subtly shaded arrangements and the cooing vocals of chief protagonists Andy Davis and James Warren, the Stackridge expatriates who shaped the band's sound.

Something About the Korgis is their fifth offering from Angel Air and their second Korgis compilation, but given the songs' strong first impression it's clear the group warrant the additional exposure. Two takes on "Everybody's Got To Learn Sometime" and a more recent release - the aptly dubbed "Something About the Beatles" - find a place among nineteen selections representing the best of the Korgis catalogue.

A bonus DVD featuring an unplugged performance by the reunited trio, archival videos and an illuminating documentary complete the package, making this a must-have for that especially discerning collector who considers him or herself a Korgis completist.

...filing under 'relevant' is an option

...the band carved its template from lush, effusive melodies, subtly shaded arrangements and the cooing vocals of chief protagonists Andy Davis and James Warren, the Stackridge expatriates who shaped the band's sound...a must-have for that especially discerning collector who considers him or herself a Korgis completist.

UK vocal/instrumental group The Korgis had a debut top twenty hit in 1979 with If I Had You. The following year they followed that up with the classic Everybody's Got To Learn Something, a track still regularly played today...This 19 track 'best of' CD collection also includes a bonus DVD of promo videos and the Korgis documentary Off The Leash.