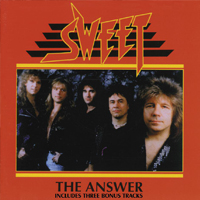 SWEET are forever associated with that tremendous run of worldwide hit singles in the 70’s (no less than 13 UK Top 20 hit singles) but their popularity remains as they tour all over Europe where they still to this day enjoy headline status at festivals.

“The Answer” was recorded in 1992 in Hanover, GERMANY and showcases how tight a rock band the group had become. This album has long been out of print with copies currently changing hands at over a £100 a copy. Now remastered with three bonus tracks

...The strength of The Answer, as written at the beginning of this review, is to perpetuate the lesson of the seventies even twenty years later, by virtue of an intellectual coherence of other times, immune to the passage of time...

...The Answer is completed with a twelve-page booklet with photos, as well as other notes about the band...hats off to history!

The hook laden contents offer diehard Sweet devotees an enjoyably derivative hour or so of listening pleasure, with 'Do As I Say' and 'Is It True' emerging as the best of the bunch.

...the Brits' tightest record, now remastered after it's been long sold out and available only at outrageous prices on LP; with this occasion Angel Air records has decided to delight us with three bonus tracks, showing diverse versions of songs already appearing on this CD bringing the length to more than 74 minutes of angelic, heady and rocking music, as well as informative sleeve notes being the icy on the cake! 93/100

..."The Answer" feels most appropriate a title, then, especially as it starts with the groovy "Do As I Say" that, given its teenage rhetoric, could have been recorded a decade earlier, and contains quirky anthems such "Stand Up" alongside more humorous fare.

Easy riding contemporary creations like the ballad "I Don't Want To Say Goodnight" by PLANET 3 and the glittery rock 'n' roll "Am I Ever Gonna See Your Face Again" by THE ANGELS, the ensemble with former bassist Mal McNulty at the mike come hard on "Nouveau Rock Star" whose somewhat plastic slap assault the celebrity culture of "heavy metal clones" yet, as Andy's heroic, although deliberately ironic, pose in "Marshall Stack" shows, they're able to mock themselves in equal measure.

...With three alternative versions as bonuses, this reissue stands as a monument to SWEET's tenacity 20 years later.

...this album would stand up well alongside any top AOR band like Bon Jovi. Each track has something to enjoy. The opener, 'Do As I Say' and the next, 'X-Ray Specs', are out and out rockers and the pace is kept up through the 14 tracks. There are mellower tracks like the slow-tempo 'Natural' and the ballad 'Is It True'.

The Answer has been out of print for some time so Sweet fans will welcome this one with open arms. By this time in their career, the guys in the band had altered their sound from buzzsaw bubblegum to more of an arena rock sound. Rather than playful catchy tunes to make teenage girls squeal, the guys seemed more driven by the desire to deliver blistering lead guitars and walls of vocals. In addition to the original fourteen tracks that made up the album, this reissue also includes the bonus tracks "Marshall Stack (Alt Ending)," "Do As I Say (Single Mix)," and "Stand Up (Hard Rock Version)."

Fans of slightly obscure melodic rock from the '80s and '90s will find a lot to get excited about on 'The Answer' and I include myself within that clique of people. Just one listen to 'Dangerous Game' and you'll be hooked folks, this is a supreme slice of AOR come latter day Sweet make no mistakes... Oh and before I forget, one of the albums real surprises for me on this record is the voice of one Mal McNulty, now I can finally see how he managed to step from Brian Connolly's shoes into the cowboy hat vacated by the one and only Noddy Holder, and there's not many people who could do that eh!

Angel Air has done a great remaster job on The Answer, so it really sounds better than ever, and there are three bonus tracks included for good measure. Toss in a cool booklet filled with photos and info, and you have a very enjoyable reissue of a long forgotten album from a legendary band.