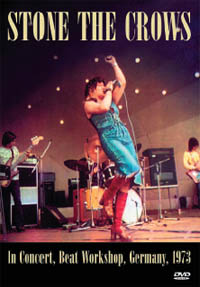 Suitably impressed, he signed them but had a name change in mind and they were renamed STONE THE CROWS. Even though their original guitarist Leslie Harvey had been electrocuted during a sound check at The Swansea Ballroom in 1972 they had regrouped with JIMMY McCULLOCH playing guitar and were at a creative and performance peak when this concert was recorded in Germany during 1973.

Now released for the first time ever on DVD.

It's an excellent watch. Mostly for the guitar work, it has to be said, and presents a rare look at a guy who would go on to help create many of the classic songs in the catalogue of Paul McCartney's Wings and both of the comeback albums by the Small Faces in the mid-70s. Jukebox (January 2007)

Classic, in every sense

Despite the vintage, sound and picture quality is excellent on this studio recorded set...What appear to be very contemporary interviews with Maggie Bell and Colin Allen add value...All things considered, as good a DVD debut as any of their fans could have hoped for.

Maggie Bell was one terrific, bluesy rock singer and this concert captures her and the band at their peak in a 1973 German performance... Bonus material here are interviews with Bell and drummer Colin Allen, who joined the Crows after being in John Mayall's Bluesbreakers. There also is a history of the band by Rich Wilson.

... a decade on from her emergence aboard Stone The Crows (also the subject of an excellent Angel Air DVD), Bell remained one of British blues' most scintillating performers.