STEVE ELLIS The Love Affair Is Over 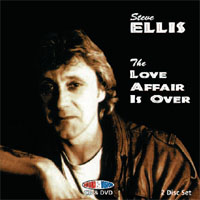 STEPHEN JOHN ELLIS having formed his first band at age 13 has spent past 40 years doing what he does best – fronting bands whilst singing lead vocals. ‘Blue eyed soul’ is a phrase that was coined with him in mind.

LOVE AFFAIR, WIDOWMAKER, ELLIS, SCARLET are just a few of the successful bands he has fronted over the years.

Disc 2 – DVD was recorded live in Bradford, England during 2002

Still going strong after ll these years, Ellis sounds as great as ever.

...a fine sound-and-vision record of a singer whose outstanding blue-eyed soul voice had retained its quality over the years.

…an essential collection to have a love affair with

…a catch-all, including his shelved Humble Pie-tinged solo album…a host of bonus tracks and a live DVD

Yet another superlative release by the dedicated team at Angel Air offers plenty of gems for fans of Steve Ellis.

The CD consists of 10 tracks plus a further seven bonus tracks. There's plenty to enjoy here and what's more apparent is that Ellis is perhaps one of the most experienced singers this country has produced...The sleeve notes put his whole career into context and offer some illuminating thoughts on his music. The first 10 tracks were recorded in '77 while the bonus tracks were recorded six years later. His voice swings from wonderful Paul Rodgers style blues to softer pop and soul harmonies.

The accompanying DVD was recorded in Bradford in 2002 and comes complete with an interview with Mr. Ellis. The 10 handpicked songs on the DVD offers deep insight into his illustrious recording career.

...his passion for music-making still remains undimmed, and this two-disc package should appeal to anyone who's ever enjoyed his work in the past...

...his voice has an amazing power and texture. Steve Ellis is probably the most underrated vocalist this country has ever produced.