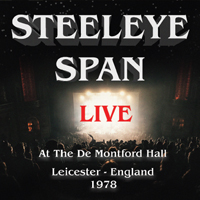 Steeleye Span, (pioneers of British folk rock) marries traditional English folk music with a harder, electric sound. Captured here in an intimate live gig. This year see’s them celebrating their 50th year as one of the top Folk Rock bands. Originally recorded for radio broadcast, but now available on CD.