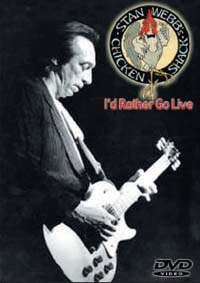 During the summer of 2004, CHICKEN SHACK enthralled a packed audience at a venue in the south of England where this DVD concert footage was filmed. STAN WEBB and Chicken Shack performed their hits live and more. The “more” includes songs from Stan’s solo albums.

Chicken Shack first entered the UK charts in 1969 with “I’d Rather Go Blind” and had a number of Top 40 chart albums. This DVD shows them at their best-playing live and whilst the Hit singles may have diminished the performances of the band continue to entertain and enthral their audiences all over Europe.

This DVD is over 2 hours in length and includes tracks from the band as well as bonus features of interview with Stan Webb and Band History/Discography.

The glory years with Christine Perfect may be long gone, but his guitar and music lives on. The camerawork and sound is good, and the bonus features include an interview with Stan as well as a band history and discography. For fans that enjoy the blues this is an interesting romp through the genre by one of the UK's best-known exponents.

...shows him doing what he does best, playing blistering guitar

A guitarist previously regarded as talented and often entertaining...a flash, crowd-pleasing rabble-rouser, basically, as likely to play hard rock as blues - is now, on the evidence of the current DVD, a mature and authoritative bluesman.

As for Chicken Shack, this is a great concert to put out at this point of their careers. I only wish it was longer, but it certainly can go a few rounds with any of its contemporaries and is recommended.

Fans of British blues-rock should enjoy this live DVD recorded in 2004 of long-time act Chicken Shack...This set here, recorded in Lyme Regis, Southern England, is full of no frills, blues soaked riffs and solos, with Webb's fiery licks and scratchy vocals leading the way...check this one out for the hot blues and rock guitar firepower, and witness a talented player who never really got his due.

...one of the better concerts (DVD's) I've had the good fortune to watch/hear recently. Five bottles of your best, Mr. Bartender. That will leave one for the cameraman, whose work is often taken for granted. Keep it up, Stan. (Full review...)