STACKRIDGE – The Man In The Bowler Hat 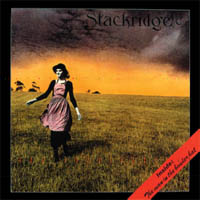 Recorded between July and September 1973 at Air Studios, London, and released the following February, ‘The Man In The Bowler Hat’ was Stackridge’s third long-player. It was, by common consent, their finest achievement, both up to that point and in their entire seven-year career.

For James Warren, Stackridge had ‘three ingredients going for it: eccentricity, Englishness and an incredible stylistic diversity. We were flying in the faces of the Frees, Zeppelins and Sabbaths, undoubtedly; but none of us were out and out rockers at heart, so we just stuck to ploughing our own idiosyncratic furrow.’

But the magic ingredient ‘Bowler Hat’ boasted was the involvement of an iconic musical figure: GEORGE MARTIN, producer of the Beatles until their split three years previously.

Andy Davis had sessioned on John Lennon’s ‘Imagine’ album, while James Warren had been inspired to pick up the guitar by such classic singles as ‘A Hard Day’s Night’ and ‘I Feel Fine’. ‘We had unwittingly joined the musical aristocracy,’ he marvelled, ‘and it was a very pleasant three-month sojourn’.

...What really works a treat on this, probably Stackridge's finest hour (from 19873) is George Martin's production...It entitles Stackridge to take their place as significant contributors to the rich diversity of the rock scene of the early 70s...

Stackridge’s tuneful charm at its most endearing

'the songs' maintain a coherent level of arrangements. The nearly homogenous treatment helps in gluing the songs together and results in a better album flow' 8.75/10

'a thoroughly good-natured project. What really works a treat on this, probably Stackridge’s finest hour (from 1973) is George Martin’s production'

This time progressive tendencies give room to playful songs...here the music goes everywhere - meandering from calypso to country...

...an uplifting collection of songs, from the beautiful Road To Venezuela to the quirky Galloping Gaucho...