STACKRIDGE – Something For The Weekend 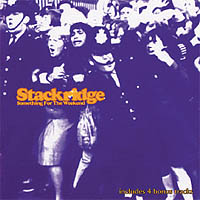 The history books suggest that West Country wonders STACKRIDGE ceased operations after a gig at Yeovil Town Hall in 1976 but ‘Something For The Weekend’ offers irrefutable evidence that this isn’t the case – not by a long chalk.

Recorded in 1997 and produced by their long term collaborator DAVID LORD this album which received rave reviews in the UK music press with MOJO dubbing ‘Something About The Beatles’ as ‘the MOJO readers anthem’ and Q commented on some ‘surprisingly potent pop’ is remastered with bonus tracks.
The weekend starts here!

Gorgeous tunes, skilfully played with just the right amount of light and shade, and recorded with evident love and care, rendered one of the band's best.

With the oxygen of Angel Air, this reissue, with bonus unreleased demos, should fly further than before. And justifiably so.

...lyrically Stackridge remained just as eccentric as ever

...it's absolutely flipping, flapping, flupping brilliant. What a stunner of a selection of songs...this is on a level with Rubber Soul and Sgt. Peppers.

Deeply melodic, strikingly hook-laden, Something For The Weekend is classic Stackridge, updated for the modern era, and so much more adventurous than most 70s reunions could even dream of proving. Maybe they should try again?