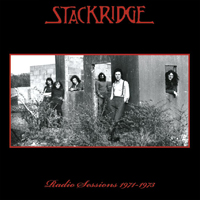 STACKRIDGE were founded in 1969 by ANDY DAVIS and JAMES WARREN (who found fame and fortune as THE KORGIS). By 1971 they had evolved to what is now seen as the “classic” line up of Davis, Warren, Slater, Evans and Bent.

The tracks on this release come from two BBC radio sessions, the first on 21st September 1971 and the last on 7th February 1973 and include a 15 minute version of “Slark”.

Included on this CD is “The Lyder Loo” which is much sought after by Stackridge fans as it is the only recording of this track which was originally slated for inclusion on the “Man In A Bowler Hat” album.

Time though has been kind to these eccentrics, whose winding, portmanteau songs wedded Beatles' melodies to a sensibility grounded in British folk.

The main prize here is 'The Lyder Loo', never issued on album. At least as interesting is a fabulous, 15-minute 'Slark', which features some extemporised wordless vocals that make it even knottier than the released version.

Probably not an entry point, but nonetheless essential.

Looks like nobody seemed to care and tape classic STACKRIDGE performances, and their only live album was recorded only in 2007. The more precious, then, are their sole TV appearance and these six cuts laid down in September 1970 and February 1973.

Blistering and brilliantly rough, the latter is of special interest because it includes apocryphal pub ditty "The Lyder Loo", bound to land on the forthcoming "The Man In The Bowler Hat", yet never taken to a studio other to the Beeb one.

More so, "The Road To Venezuela" and "The Galloping Gaucho", originally split between different vinyl sides, become a sort of vaudeville suite here, while the same Latino rhythm is set in the opener "Three Legged Table" from the group's debut.

And if this glamorous song comes severely shortened, the compensation arrives with the significantly revised "Slark" which laps lazily across its own album mark, as Michael Evans' violin and Mutter Slater's flute claim the funny folksy space over from Andy Davis and James Warren's soft vocal melange.

But radio or not, "God Speed The Plough" retains its orchestral beauty while expanding the initial classical quotient... and that's what the whole of this disc does with STACKRIDGE legacy.

...some classic examples of their distinctive melodic whimsy...

Included are the must have tracks "Slark" (a fifteen minute version) plus the hard-to-find only recorded version of "The Lyder Loo."

Rounding out the disc are live versions of "God Speed The Plough," "Road To Venezuela," and "The Galloping Gaucho" (a fan favorite)...

We highly recommend anything and everything that bandleaders Andy Davis and James Warren are involved with. They most certainly are two of the best pop musicians of the past few decades.

...the otherwise unavailable The Lyder Loo, a discard from The Man ln The Bowler Hat album (on which the other three 1973 session tracks appeared in studio form) and a 15-minute version of the classic Slark from !971, with fabulous Mutter Slater flute, make them well worthy of exhumation...Quirky pop like this is a rarity today, and the rude vocal adlibs on The Road To Venezuela still raise a schoolboy smile.

lf may sound am-dram, but Stackridge embraced their more eccentric proclivities. Besides, the early 70s - when Monty Python, The Incredible String Band and medieval music could influence a band equally - was a particularly purple period for such pure prog-folk oddness.

Stackridge could play too: the exotic rhythms and sub-Saharan singing of 'Three Legged Table' is quite a contrast to the early music minstrel strum-along of the unreleased The Lyder Loo. Storytelling folk lies at the heart of these songs but with clear Beatles influences and a West Coast approach to warm harmonies, Stackridge's early work still holds its own against that of their many colourful contemporaries.

Only six tracks, 'The Lyder Loo', 'Three Legged Table', 'God Speed The Plough', 'Road To Venezuela', 'The Galloping Gaucho' and an overlong 15 minute 'Slark', but the inclusion of that rare track should ensure good sales. Probably for completists only.

...the cheery, tuneful Three Legged Table is given an irrepressible South American makeover, all handclaps and whoops backed up by the harmonies of James Warren and Andy Davis; something that sounds comedic but is actually beautiful, both in sound and execution. The other song is the band's magnum opus Slark, which is by far the best version ever recorded.

...The recordings here are superb and show the band at their most confident and innovative.