STACKRIDGE Anyone For Tennis – Sound And Vision 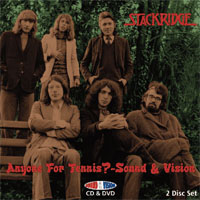 STACKRIDGE are held dear by fans all over the world for their irreverent, idiosyncratic attitude and musical eclecticism. The band was formed in 1969 when JAMES WARREN defected from local Bristol band DAWN to join ANDY DAVIS and CRUN WALTER.

Their debut album was released in 1971 and some 7 albums in total were released over the next three decades from which all of the tracks on the CD are drawn except the track “Purple Spaceships” which has been recently revisited for this release.

Disc 2 (DVD) is a sold out concert filmed in 2007 at Rondo Theatre, Bath, England attended by a capacity audience with MUTTER SLATER commanding audience attention and participation.

The CD on this set is a 'best of' which has been seen before back in 2006 and is a good introduction to this quirky band who cover everything from folk through to pop, whimsical tunes like ‘The Galloping Gaucho’ and a bit of prog as can be heard on ‘Fish In A Glass’. The band are very talented musically and for those new to the band this is a good as place as any to start off.

The DVD was recorded at a concert in Bath last year and is preceded by interviews with avid fans who were obviously really looking forward to the gig. The set list comprise twenty five songs including the Korgis hit 'Everybody’s Got To Love Sometime' as the Korgis featured a couple of members of Stackridge. The band’s sound is expanded in the live arena by adding two female violinists, one of whom also adds backing vocals. As an added bonus you get interviews with the band members (conducted on a rooftop of all places!) where the band give some wonderful insights into the first ever Glastonbury festival.

A perfect sound and visual introduction to the band who deserve a wider audience to go with the critical acclaim they have already received down the years. ****

The CD has fifteen tracks culled from the band's entire catalogue; going back to their eponymously titled debut album from 1971 and coming right up to date with a re-working of 'Purple Spaceships Over Yatton'.

The instrumental 'Lummy Days' is a strong opener, and amongst the collection are favourites such as 'Syracuse The Elephant' and 'Do The Stanley'.

If you've never heard any of Stackridge's music before, this is a great place to start, and it'll have old fans digging out their old albums again.

The DVD is a gem, a live concert filmed in 2007 at a sold out Rondo Theatre in Bath. Two and a half hours of classic Stackridge music featuring the band's main four stalwart members James Warren, Andy Davis, Mutter Slater and Crun Walter.

An audio CD featuring many of the band's finest musical moments is coupled with a DVD recorded at their concert in Bath last year...

...combination of quirky pop, understated classical elements and a pastorally English songwriting maturity retains its charm down the years...

...the irresistibly melodic Squeeze-style Last Plimsoll, the gorgeous pop harmonies of Friendliness and the proggy instrumental Purple Spaceships Over Yatton indicate that Stackridge were more than funsters...a fine collection...

A perfect melange to lose the game - and be revered now...And then go back to investigate the albums' context.

...while it may be too late for Stackridge to attain any modicum of the fame and fortune that eluded them in their prime, a case could be made that for a deserving ensemble such as this, any attempt - even three and a half decades on -- is still none too late.

Of course, one should expect there would be ample evidence as to why anyone other than their original diehard devotees should care about Stackridge resurfacing. So fortunately, these two double discs offer the uninitiated an enticing backwards glance of the group in all their glory via the cream of their catalogue. While 'Anyone For Tennis?' offers a basic compilation/compendium (as well as a DVD of the aforementioned The Forbidden City performance),

...while 'Anyone for Tennis' is fine for starters, it takes 'The Forbidden City' to prove -- its intimidating title aside -- that catching up on guilty pleasures like these can be ever so liberating.

...many of the band's finest musical moments...