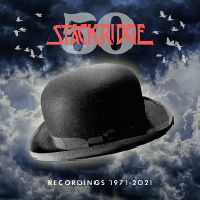 On the afternoon of August 19th 1971 an event took place in the Garden of The Chelsea Arts Club, South Kensington, London, which was billed as “A Summer Garden Party”. The invited guests were a mix of music business luminaries – agents, managers, record company executives, venue promoters, music paper journalists and musicians from the world’s of rock and pop.

At 6.30pm a group of Musicians sauntered onto the lawn, plugged in their instruments and began to play perhaps the strangest tunes that these jaded ears had ever heard. Sadly they only managed three numbers before the club’s management asked them to stop as they had received so many phone call complaints about the “noise” from the neighbours.

The name of the band was Stackridge. This 3CD release is a celebration of 50 years, with a collection of the band’s favourite tracks.