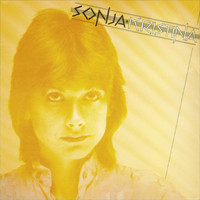 SONJA KRISTINA fronted CURVED AIR from its inception in 1970 until its split in 1976. She then embraced the vibrant music of the late ’70s and formed her own band Sonja Kristina’s Escape (whilst her husband STEWART COPELAND formed The POLICE).

The album “Sonja Kristina” was released in 1980 and whilst it is credited to Sonja it is really the band Sonja Kristina’s Escape who established themselves as one of the strongest bands on the club circuit in the late ’70s.

For any fans of Sonja or Curved Air, this is well worth seeking out, as it sees her at a fascinating juncture of her career, seemingly tentative about which way to go next.

The new wave-ish 'Breaking Out In Smiles' sounds like OMD and 'Roller Coaster' is white reggae in a Police-style. But 'The Comforter' is unreconstructed prog...the acoustic 'Colder Than A Rose In Snow' harks back to her folkie days when she briefly sang with the Strawbs...

It is the archetypal transitional solo album, and signposts the way to her hard-rockin' future.

This album is a curious mix of Hazel O'Connor-esque punk-pop (Street Run, Breaking Out In Smiles), a dip back into her 60's folky past (Colder Than A Rose In The Snow), with funk (Roller Coaster) and a single cover of Spirit's Mr Skin.

This solo album's second CD release in eight years, albeit with a new sleeve, may find favour with those who missed it back in the day.

This record really brought back a lot of memories of what I was listening to back in the day - it still holds up pretty well and gets a well-earned 3.5 stars.

The funky "Roller Coaster" or "Breaking Out In Smiles" might sound dated, but the twang of Steve Byrd's guitar and Alfie Agius' bass carries Kristina's bouncy voice with flying colours through the kaleidoscopic vocal harmonies of vaudeville-vaulting "Man He Colour" and "Full Time Woman" that channels "All The Young Dudes" panache via its slow boogie veins.

They're cut open once the skittering "The Comforter" comes on all slim and sharp, shifting time signatures and getting heavy and street smart before the riff of "St. Tropez" rides the juvenile delinquent effervescence, and it's only "Fade Away" that marries the singer's two loves - music hall and rock 'n' roll - thus expanding her creative palette.

Many of these tracks would appear on the "Sonja Kristina" follow-up, although 1991's "Songs From The Acid Folk" and later experimentation rather build on their original vibrancy than match it. Sometimes running away is all what's needed for real zest. 3/4 stars.

This album is in the same general vein as the last two or three Curved Air albums. The songs feature nice thick arrangements and, of course, those trademark dreamy vocals. We're glad that this album is once again being made available to the public. We've loved anything/everything that Sonja has been involved in. Ten groovy cuts here including "Street Run", "Breaking Out of Silence", "Full Time Woman", and "Fade Away". babysue (February 2014)

Just how fine a voice Sonja has is particularly exemplified on the track 'Full Time Woman', a wonderfully constructed and insightfully performed song which tells of a woman who was having an affair but which in the end becomes a full-time thing. Then there's the simply beautiful 'Colder Than A Rose In Snow', a song which had been written for Sonja by one Norma Tager, and which wouldn't sound out of place if performed by the likes of Joan Baez. Violin and harpsichord add further beauty to this musical rose. Music-News (February 2014)

...this 1980 album has become quite a rarity in vinyl form. The contents were recorded by Sonja and her band Escape with producer Nigel Gray, who also oversaw the first three Police albums, and feature a vibrant cover of Spirit's 'Mr. Skin' alongside a generous helping of mildly quirky melodic rock.