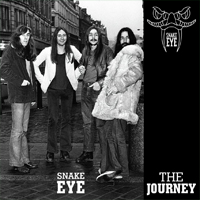 SNAKE EYE started life as the band RED DIRT who in 1970 had a self-titled album released on the Fontana label. After playing numerous dates in London the band were signed to new management who promptly changed the band’s name to SNAKE EYE. The band then toured with many of the top acts at the time including FREE, MARC BOLAN, KINKS, STATUS QUO and J GEILS BAND.

In 1972 the band went into the studio to record their debut album which was described at the time as a cross between King Crimson and Wishbone Ash. MANFRED MANN praised the band “as one of the best bands he had seen”. The world was their oyster but musical tastes were changing fast and by the end of 1973 with no major label signing the band folded.

Now released for the first time ever a true Prog rock gem from the early ’70s.

Strangely for an album where they are buried deep within lengthy twin guitar interplay and booming rhythms, the vocals from Dave Ritchie offer a dreamy change of mood that fits the music well. Although there's little doubt that it's the fret work of Ritchie and Ron Hales, and how that melds keenly with Ken Giles' bass, that is the key to what makes The Journey as engaging as it is. Drummer Steve Jackson holds up his end of the deal, eagerly adding emphasis and style - as does Gary Boroughs who appears behind the kit on two tracks to Jackson's four...the six main album cuts are worth the price of entry alone, the easy mannered but pinpoint sharp and hugely memorable melodies this outfit were capable of weaving, really quite impressive.

Personally I'd never heard of Snake Eye before this welcome Angel Air release, something explained by the fact that these recordings have never actually seen the light of day before. The debut Snake Eye album coming some 44 years too late for them to hit the big time. Which when you consider just how good their music was, is nothing short of a travesty. Fans of Wishbone Ash will lap up The Journey and wonder at what could have been for an undiscovered band that deserved so much more.

All written by Richardson, with the exception of a co-write with Hales (original drummer Jackson was replaced by Gary Burroughs on two tracks, liner notes misspell), half the number of tracks compared to Red Dirt's debut signal the new direction. Pulsing Rickenbacker stereo bass opens the title track, joined by orchestral-like guitar and atmospheric harmonies, then the dreamy interludes of World In A Mountain build to fine solos. Twin guitars (both Gibson SG's) swirl over a Nick Pickett-sounding vocal (Sweet Dream Lady), followed by shimmering cymbals with guitar-picking, power drumming and bass oscillating crescendo and interlude (The Heart Of A Young Boy). As it's about a youth's early death, the twin vocals haunt in their contrast fitting the tragic theme; one can even imagine the poor chap's last breathing. This isn't prog for its own sake but inventive creativity.

Energy is upped with prickly, staccato guitars reminding of Steve Hillage complete with some pungent riffing (Don't Be A Fool), then atmospheric vocal and wide palette on the mystical 13-minute closer The Journey's End. All combine for middle riffs as time changes stun by their variety, a hallmark of this imaginative combo. The bonus tracks are a surprise-but not if you have the Red Dirt album. The violin-led (by multi-instrumentalist Dave Richardson) group composition Tolly Cobbold, from early Morgan sessions in 1970, would have been perfect for a quirky single-think of a jam with East of Eden and Steeleye Span!

The album was recorded in 1972, but then, despite hawking it around various record companies, it failed to get a release and the band folded (until, that is, guitarist Ron Hales resurrected them with a new line-up this year). They deserved better, as this six track album, with its twin lead guitar form, is a pretty enjoyable listen...an interesting enough curio to invest in and see for yourself.

If your hankering terribly for early-70's twin lead guitars, you owe it to yourself to sniff out The Journey (****) - recorded in '72 but unreleased until approximately this instant...Formerly trading as Red Dirt, under which name they issued a hugely collectible self-titled album for Fontana in 1970, Snake Eye played with a tenderness that whispers volumes about their maturity and discreet confidence. The title track and 'Don't Be A Fool' are little paragons of jazzy, gentle sophistication, while you could play the dry and deliberate 'World In A Mountain' to any of your muso pals and tell them it was by Wolf People, and they'd believe you. Yep, it's that good.

...Strange as it may seem, the most elaborate and at the same time beguiling display of the group's method is epic "The Journey's End" where a psyched-up tension and romantic release bring out the best in them. The clarity is there, in the title track, whose two guitars - that Ron Hales and Gary Boroughs interweave in an intricate if loose pattern akin to early WISHBONE ASH - envelop a jazz-tinged rhythm and introduce mellifluous vocal harmonies, and in the intermittently effervescent "Don't Be A Fool" that Dave Richardson's pipes inform with a call to action.

The Journey was recorded in 1972 but never released. Dual guitar, changes of tempo with melodic to heavy elements of both British and American rock infecting their sound, allowing the listener to draw comparison to everyone from Blue Cheer to Wishbone Ash.

Lengthy tunes filled with extended, melodic guitar solos, more than a fair share of complex musical passages, strong vocals, and the occasional heavy riff...these are some of the characteristics that you'll find on the one and only release from Snake Eye, titled The Journey. Originally recorded in 1972 but failing to secure a label for its release, this British band played numerous gigs with some of the heavyweights of the day but quickly folded, never allowing The Journey to see the light of day until now thanks to the folks at Angel Air Records. With a dual lead guitar attack that owed as much to Wishbone Ash as it did to the Allman Brothers Band, Snake Eye were ripe for stardom but it was sadly never to be. The album is an excellent snapshot of the times, the guitar interplay stupendous on tracks such as "World in a Mountain", "Sweet Dream Lady", the jazzy "Don't Be a Fool", and the epic Wishbone Ash-meets-King Crimson intensity of "The Journey's End".

Angel Air have added two bonus tracks here, "Tolly Cobhold" and "Hoe Down", both brief tracks that are in a completely different style than the rest of the album, more of a country & bluegrass flavor than the progressive hard rock, blues, and jazz that you'll hear prior. Apparently the band have reformed with original guitarist Ron Hales at the helm, so it will be interesting to see what the future holds for Snake Eye. In the meantime, any fan of early '70s hard rock & prog will want to investigate this one.

With the song 'The Journey's End', they prove their great potential and you can only regret that the band prematurely shut down. There are also two interesting bonus tracks that actually come from their folk roots. 'The Journey' may therefore tempt us. Singer Ron Hales has now brought the group back together and this re-release will be performed live in Hull on 14th October. Let's see what happens after this reunion. To be continued!

...The six main album cuts however are worth the price of entry alone, the easy mannered but pinpoint sharp and hugely memorable melodies this outfit were capable of weaving, really quite impressive. Personally I'd never heard of Snake Eye before this welcome Angel Air release, something explained by the fact that these recordings have never actually seen the light of day before. The debut Snake Eye album coming some 44 years too late for them to hit the big time. Which when you consider just how good their music was, is nothing short of a travesty. Fans of Wishbone Ash will lap up The Journey and wonder at what could have been for an undiscovered band that deserved so much more.

With such a keen focus on progressive rock bands from the 1970s in the twenty-first century, this one ought to be an instant obscure favorite among music fans...Incredibly, the album has remained unavailable and stored away in the vaults until now. This is definitely one of those glimpses into a band that could've been huge...if all the pieces had fallen together like they should have. Sadly, the group threw in the towel not long after they recorded this album. But now (once again, thanks to the fine folks at Great Britain's Angel Air label) the tracks can finally be heard by everyone. A true lost progressive gem. Fans and critics will love cuts like "The Journey," "World In A Mountain," "Don't Be A Fool," and "The Journey's End." Includes two bonus tracks: "Tolly Cobbold" and "Hoe Down" (recorded live).