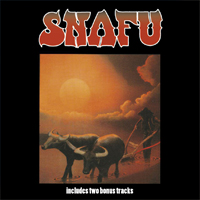 Released in 1973 the album “Snafu” was the birth of one of the finest funk/R&B British acts of the 70′s. BOBBY HARRISON who was the original drummer in PROCOL HARUM and played on their HITS “Whiter Shade Of Pale” and “Homburg” had formed FREEDOM switching to lead singer after leaving Procol and recording a number of classic albums before in 1972 launching a solo career and by then had become friends with MICKY MOODY whist touring with JUCY LUCY.

Booby and Micky then formed SNAFU (an unofficial military abbreviation for the ironic phase “Situation Normal All F***** Up!”) and recorded at The Manor Studio, Oxford their stunning debut album. The group started to tour to promote the album in Europe and in USA supporting the DOOBIE BROTHERS and The EAGLES.

This is US-influenced blues-rock all the way, the opening cover of the Allman Borther's 'Don't Keep Me Wondering' being followed by 'Long Gone', a self-penned sound-alike of Little Feat's 'Spanish Moon'...the musicianship is tighter than tight, abetted by a class rhythm section in Colin Gibson and Terry Popple...This would have been a short show had the six live tracks been its sum, so four very much heavier efforts from Harrison's later outfit Niagra round out the package.

This live recording from 1976 in Nottingham is a blessing with a group at the peak of their art, six titles of very good sound quality allowing us to relive the funky rock blues inspired by ALLMAN BROTHERS or LITTLE FEAT...Beginning the concert with 'Don't Keep Me Wondering' and we get to know this rather unique sound, mixing rock with funk and it's great. The husky voice of Bobby Harrison is up-front, there's no question these are top level musicians. The group is led by the guitar of Micky Moody that's like hot embers when combined with Tim Hinkley's crazy electric piano. The rhythm section is impeccable, not to mention the percussion by Bobby Harrison.

Snafu were nearing the end of their brief existence when this muscular performance was captured for posterity at Trent Polytechnic in January 1976. The outfit formed by one-time Procol Harum drummer Bobby Harrison had recorded three critically acclaimed albums by this stage but commercial success had largely eluded them and departure of slide guitarist Micky Moody for pastures new with Whitesnake effectively signalled the end of the road for Snafu's robust fusion of blues, funk and country rock. 'Highway', and the soulful 'Every Little Bit Hurts' are the best of the bunch.

...Freestyle blues and call-and-response are added to the heady mix for "Big Legged Woman" which the group never took to the studio to expand on the piece's fusion in a more disciplined way, leaving this version the testament to their ability to throw caution to the wind and cruise around the tune, but the cover of "Every Little Bit Hurts" is as soulful as it gets, without embellishments except for a filigree guitar figure on a solo...

...Rounding off the listening experience, in inferior sound quality, are four cuts from 1977 by Bobby's next band, the short-lived NIAGRA: a much more polished proposition, filled with vocal harmonies on "Crossfire" and smearing AOR all over the punchy "Cold Eyes" whose surface is punctured with a sharp riff. Far from SNAFU's rawness, these numbers only stress how special that quintet was - great while it lasted and coming alive now. 4/5 Stars.

Snafu's blues rock inspired the legendary bands Little Feat and The Allman Brothers. The American blues with slide guitar and a funky rhythm also reminds us of Grand Funk Railroad. At the intro of this live album you can already hear the honest, pure sound of the group. Raw unpolished singing by Bobby Harrison and funky guitar by Micky Moody with Tim Hinkley at the Hammond organ. Bobby's energy shatters his vocal cords, and Micky pulls excellent dirty sounds from his guitar. A few weeks later he switches from Snafu to David Coverdale's Whitesnake. This also meant the end of Snafu. The recordings of Live Nottingham 1976 are beautifully honest, as pure as it was at the time - no technical gadgets or tricks, no, the music came directly from the heart and soul!

If you're a Bobby Harrison, Micky Moody or SNAFU completist, then Live In Nottingham 1976 will prove a vital addition to your collection. For anyone else there's undoubtedly a great hard blues rock act here to be discovered...

Snafu were at the peak of their creative and live capabilities when they performed at the Refectory at Trent Polytechnic in 1976 with 3 albums already released and their stock high amongst both fans and fellow musicians...Tracks are 'Don't Keep Me Wondering', 'Long Gone', 'Big Legged Woman', 'Every Little Bit Hurts', 'Unsettled Dust', 'Highway', 'Crossfire', 'Victim Of Love', 'Cold Eyes' and 'Don't Be A Fool'.

It is a short set, only six songs, yet you get a good feel and sound of the band as they play blues rock set of covers and their own songs. Highlights include the slow blues burner 'Every Little Bit Counts' which highlights Bobby Harrison's emotive singing and the rocking 'Highway', where Micky Moody plays up a storm.

This short-lived band from the 70s are a welcome addition to the re-releases of recent years...The overall sound was quite American and very rock/funk, although they were always more rock than funk...As usual there are excellent sleeve notes to accompany some great music...

...you'll find appearances are deceptive: the laidback country-rock groove sustained throughout has held up remarkably well in the quarter-century since its release...Had it come from an American band, "All Funked Up" would undoubtedly have done better...

"All Funked Up" is Snafu's elusive third album reissued on CD for the first time. The blues debt is evident...while the Billy Gibbons-like overdriven slide adds a touch of Southern boogie to the mixture...

It's not hard to see why many fans reckon All Funked Up was Snafu's finest ever album.

This is the band's second album originally released back in 1974 and saw Pete Solley take more of the limelight, which as a result sees this album have a much more country rock leaning than the debut. That said, like the debut the band try a fair few musical avenues throughout the album including the folk meets country of 'Brown Eyed Beauty & the Blue Assed Fly' This is great musical fun with Pete Solley laying down some mean fiddle playing.

Micky Moody shows his classy slide playing on 'No Bitter Taste', a lovely blues rock stomper. For me it does drift a little on the extended jam of 'Playboy Blues'. Mind you 'Big Dog Lusty' is a corker, like the Eagles in their prime. Vocalist Bobby Harrison is the unsung star of Snafu as he has such a powerful and emotive vocal, quite why he never became more well known is a mystery.

It beggars belief that the album didn't do well, an unfortunate fact further soured by the decision to book SNAFU as the opening act for Emerson, Lake & Palmer during a US promo tour. Indeed, how could fans of Emerson & Co possibly relate to the musical offering of SNAFU? They couldn't, and sadly it spelled the beginning of the end for the band.

A couple of quite lengthy tracks save this one, which is probably less consistent but has greater highs than the debut.

...toe-tapping and Moody's guitars, otherwise unaccompanied, take 'Lock And Key' to a bluesy heaven, while 'No More', lazily driven by Terry Popple's bass and spiced up with Colin Gibson's percussion, shakes its wares the Philadelphia International-way.

This album is a nice mix of funk, blues and the soulful singing of Bobby Harrison, whose voice switches with ease from the soul/funk of say 'Drowning In The Sea Of Love' to the more straight ahead blues rock of 'Long Gone'...Two bonus songs on this re-issue are the bluesy, heavy on the Hammond 'Sad Sunday' and 'Dixie Queen', a decent 70's funk rock song.

...An enjoyable album, cleverly mixing funk, rock, blues, soul and country although perhaps with the band covering so many musical bases this may have limited their appeal back in the day.

'That's The Song' (co-written by acer Jerry Marcellino) is – in my opinion – precisely that. Namely THE song on the album that ticks every single one of my 'Yes' boxes, and I'll be damned if it won't tick yours too: a fast and funky, gospel-oriented number with a constant build-up as far as dynamics and energy go. Holy Rollers! This one will have your limbs go all jerky, with your head bobbing along to every note and chord. There's also some exquisite choir work incorporated to great effect. What am I saying, of course there is.

...'Snafu' was their hugely impressive debut set. The finished product blended elements of rock, funk and country to excellent effect and was a huge hit amongst the critical fraternity, boasting fine tracks such as 'Long Gone' and 'Country Nest'.

Wow...hard to believe this was really recorded way back in 1973...??!! Snafu was an early seventies band formed by ex-Procul Harum drummer Bobby Harrison and Mickey Moody. This, the band's debut album, has held up surprisingly well over the years...no doubt in large part due to the excellent sound quality courtesy of producer Vic Smith and the band members themselves.

This disc presents all eight tracks that were on the original album plus two bonus tracks ("Dixie Queen" and "Sad Sunday"). These guys plays a mighty ferocious funky brand of rock music that was the staple of the early to mid-1970s. Listening to this now, it seems odd that this band was not recognized more when they were together. The sound is reminiscent of many bands who enjoyed a great deal more commercial success (???). Our favorite cuts here include "Long Gone," "Monday Morning," "Funky Friend," and "That's The Song." In addition to this album, the folks at Angel Air are also making the Snafu albums All Funked Up and Situation Normal available to the public once again... Good solid stuff.

There are good songs here...The two sides of a single are added as bonus tracks, and oddly enough the B Side, Sad Sunday, is possibly the strongest song on offer here.

"Long Gone", rising up on Pete Solley's ivory swell, is a perfect opener to this vibrating slab of funky blues, and the cover of "Drowning In The Sea Of Love" packs the players' soulful side in a wild Latinesque glitz, thanks to drumming of Terry Popple, the axeman's erstwhile colleague in TRAMLINE. Elsewhere, the infectious boogie of "Said He The Judge" comes on as a clear precursor to Micky's subsequent work with WHITESNAKE - taking away much credit from David Coverdale.