SNAFU – All Funked Up 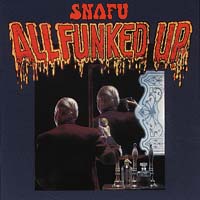 This first-to-CD release completes the Snafu story on Angel Air, following on the heels of the 2-CD set Snafu/Situation Normal (SJPCD030). The band’s third LP “All Funked Up” has long been regarded as their “great lost album” and difficult to track down on vinyl. Before the recording, original keyboard player Pete Solley had left to be replaced by Brian Chatton (previously with John Miles) and Tim Hinckley who was a much-in-demand session player at this time.

Original members Bobby Harrison (ex-Procol Harum, Freedom) and Micky Moody (ex-Juicy Lucy) had worked together on Harrison’s solo LP “Funkist” after the demise of Freedom in 1972. Harrison decided to take the role of singer and frontman and he and Moody started to audition new band members. They found former Tramline drummer Terry Popple (later with Van Morrison) and bassist Colin Gibson (a former member of Ginger Baker’s Airforce).

Snafu were something of a musician’s band and drew their influences from American Southern Rock, notably the Allman Brothers and Little Feat. After three albums and several European tours the band split, Micky Moody going on to Whitesnake. Bobby Harrison spent some time in Iceland where he teamed up with Mezzoforte for the “Solid Silver” album (Angel Air SJPCD011).

This short-lived band from the 70s are a welcome addition to the re-releases of recent years...The overall sound was quite American and very rock/funk, although they were always more rock than funk...As usual there are excellent sleeve notes to accompany some great music...

...you'll find appearances are deceptive: the laidback country-rock groove sustained throughout has held up remarkably well in the quarter-century since its release...Had it come from an American band, "All Funked Up" would undoubtedly have done better...

"All Funked Up" is Snafu's elusive third album reissued on CD for the first time. The blues debt is evident...while the Billy Gibbons-like overdriven slide adds a touch of Southern boogie to the mixture...

It's not hard to see why many fans reckon All Funked Up was Snafu's finest ever album.