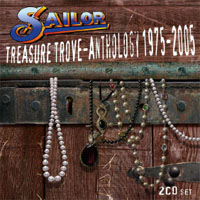 Angel Air release from SAILOR a 38 track Golden Anthology of Greatest Hits, secret gems and timeless classics, a rare treasure trove of previously unreleased material capturing the unique identity of one of the most entertainingly original and innovative bands of all time from the UK.

The ultimate SAILOR collection-2CD’s 38 tracks containing HITS HITS HITS, ‘A GLASS OF CHAMPAGNE’ and MUCH MUCH MORE. Compiled by PHIL PICKETT.

It shows Sailor to have had a quirky and interesting style with some good ideas.

As with all Angel Air releases, it's a stunning set'The band's earliest demos and tracks intended for their projected, but never released, seventh album TV Land are the real jewels within for fans, but there's plenty more rarer old and new music to explore. A must for every Sailor fan.

...sultry rock steady is married to Weimar-esque heartfelt recklessness...You can all join in

This handsomely-packaged double-disc set tells the story of Sailor...there's plenty of value here, not to mention historical interest...Sailor sail on...this will satisfy their devotees.

...these 38 tracks on two discs touch on all manner of musical styles...

...their innate sense of fun and their ability to pen consistently memorable material...suggests an act worthy of reappraisal.

...a great introduction for anyone who missed Sailor first time round.