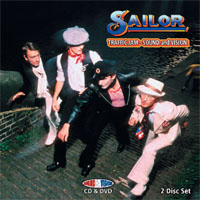 SAILOR had numerous UK and European HITS during the 70’s. Disc 1 is 19 tracks from the original Sailor line up recorded during that decade. This CD captures the unique identity of one of the most entertaining and innovative bands of all time to come out of the UK.

Disc 2 (DVD) is a concert filmed at The Swan Theatre, High Wycombe, ENGLAND during 2002 to a capacity audience from all over the world.

A CD of Sailor's very best tracks, along with a live DVD, what more could you ask for.

This is a fantastic package with the very best of a vastly talented and under-rated band. There is only one problem with the CD – but it turns into a plus. Some of the hits are not the original recordings, but they are live recordings which make them all the more desirable, especially if you already have the originals.

That's quite an enigma, why in our times of ad predators hawking on any catchy piece of music there is don't lent their ears to the SAILOR songs which can gloriously accompany every image on Earth.

he English band still ride the waves - the testimony to that lies in the DVD included in this "Sound And Vision" package - so it's never too late to seize the opportunity, and this compilation offers the map to the ensemble's journey. With their "alternative" history served on "Treasure Trove", it's not the straight anthology, still, as the chronologic principle can't be applied to the band so fully formed from the early '70s start, and all of the songs here sound as if they belonged to a single era.

From the duo called KAJANUS / PICKETT's ringing "Changes" through the sparking live take on "Panama" to the quintessential SAILOR frivolity of "A Glass Of Champagne" and the Tchaikovsly-quoting anthemic "Perfect Time", the music is as modern as it gets. Blame it on the rich vocal harmonies, the enigmatic instrument that is Nickelodeon, or the catchy melodies but, as Georg Kajanus, Phil Pickett and their compadres would put it, it's your own soft spot the band just hit. And how one could go wrong with the "Girls Girls Girls" party call? Hey, PR gurus, all hands on deck! *****

The collection of 1973 demos is particularly interesting, serving up embryonic versions of future singles...

The English band still ride the waves...so it's never too late to seize the opportunity, and this compilation offers the map to the ensemble's journey...

The band had a string of hits during the mid '70s, and was best known for its campy, theatrical persona and impeccable harmonies.

Traffic Jam is a comp that culls live performances with studio versions and demos. It also includes a DVD featuring a reformed version of the band.