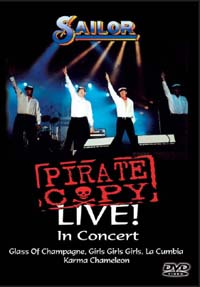 SAILOR was signed to Epic records (part of CBS) during 1974 and they quickly experienced chart success in Holland with “Traffic Jam”. In the UK “Glass Of Champagne” made no 2 in the charts during 1975 with “Girls, Girls, Girls” making Top 10 in the UK during 1976 and further single chart success during 1977 with “One Drink Too Many”.

Singles success was a very small part of what Sailor were about as they also had hit albums such as “Trouble” coupled with their live reputation but by 1980′s release of the album “Dressed For Drowning” the band called it a day. PHIL PICKETT then joined CULTURE CLUB and co writing one of the biggest and most popular hit’s of the 80′s “Kama Chameleon”. The Sailor story did not bite the dust there as in 1989 BMG Records in Germany approached the band to record some new tracks which became sizeable hits all over Europe “The Secretary,La Cumbia”. A new album Streetlamp” was also recorded.

In 1993 the band reformed for touring and at the huge Waldbuhne Stadium in Berlin they played to over 25,000 fans. This was quickly followed in 1994 with a “Greatest Hits” release from Epic Records.

Now in the 21st Century and their 4th illustrious decade, Sailor still surprise, entertain and enthral audiences with their incomparable style of powerful music and theatrical entertainment recorded at The Swan Theatre, High Wycombe, UK during November 2002 to a sell out audience.

Sailor's original line-up enjoyed an impressive run of chart success in Britain and abroad during the mid-seventies…This live offering has been compiled from a selection of German concerts which Sailor performed two decades later…embracing a string of golden oldies alongside covers of everything from 'Mack The Knife' to 'La Bamba'.

…like many bands of their generation, making a very nice living in Europe where the people are not so fashion-conscious as us Brits…obviously a very pleasant evening spent in the company of an unusual and highly entertaining band.

I was lucky to be able to visit that glorious night at the High Wycombe "Swan Theatre" in November 2002. After coming home I wondered if all that I saw and heard there was true or was it a dream? ...But now the waiting has come to an end, the DVD is in my DVD-player. I tell you that I can't describe how fantastic this document of music is, my words are too poor for that.

You can watch the whole concert in a perfect video and sound quality, not a single song they performed in High Wycombe is missing. You can see Peter Lincoln, the gifted musician at the guitar and perfect singer, Phil Pickett at the bass side of the Nickelodeon, absolutely perfect and very entertaining, at the drum, with the right feeling for rhythm, drums and percussion, the man who doesn't seem to become older, Grant Serpell and at the treble side of the Nickelodeon, the youngster of the SAILOR-crew, Rob Alderton. He's a real musical genius, improved the Nickelodeon by adding a third keyboard to bring back the original sound of the first Nickelodeon, absolutely perfect.

All these members are interviewed on the DVD in addition to the interview with Katrin and Karsten Wagner. The SAILOR history and some unplugged tracks make this DVD complete. Your SAILOR collection is not complete without this.

...it's brilliant, marvellous, f------ out of this world! It's taken a long time for this day of joy to arrive but it's here now. I've been a fan of SAILOR since the first SAILOR album - before the hits came along. I remember many a gig up and down the UK. And what a great set of albums from 1973 to Live in Berlin.

It's a great DVD, brings back wonderful memories, to hear the greats from many great albums

For nearly thirty years hardly anything has changed in SAILOR (except for the line-up): The Nickelodeon was updated technically and with synthesizers,but it still fascinates with its fairground-sound. The songs have always sounded as if they were from the 1920s, and at the same time dust-free ("Girls GirlsGirls", "One Drink Too Many", "Jacaranda", "The Old Nickelodeon Sound"). The stage is still lightened by an intimate sailor-pub-illumination and a streetlamp. And the original members Phil Pickett (nick), Grant Serpell (dr) and "the new guys" Rob Alderton (nick) and Peter Lincoln (voc, gtr) are still faithful to their outfits.

In spite of all the show and the closeness to the English Cabaret, SAILOR, whose respective members have kept the fun of playing, are a convincing band, especially because of their music and vocals. "Pirate Copy" is therefore advisable for fans. As a bonus there are three "unplugged"-tracks, a detailed band-history and interviews.