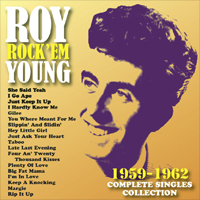 ROY YOUNG is a living legend who was invited by Brian Epstein to join the BEATLES, toured and recorded with CHUCK BERRY, The BEATLES, and DAVID BOWIE. JEFF BECK, DEEP PURPLE, ERIC CLAPTON and GENE VINCENT. Roy is in some people’s minds the greatest and most original Boogie Woogie piano player ever to emerge from the UK.

Back in the 50′s Roy appeared on many TV shows such as “Oh Boy” and “Drumbeat” and went on to become one of the UK’s greatest exponents of rock ‘n’ roll. He even joined at one stage during the 60′s CLIFF BENNETT & The REBEL ROUSERS and performed on their HITS “One Way Love” and “Got To Get You Into My Life”. In 1977 DAVID BOWIE asked Roy to play keyboards on his album “Low” which they recorded in Paris

Roy has been back in the studio to remaster his singles as well as adding three bonus tracks from 1962 recorded at The Star Club, Hamburg, Germany.

...Would Jim Wilson's 'Big Fat Mama' stand any chance nowadays to be hit potential in our size zero obsessed culture? Here is a very fast rock n roll number (once again Roy's own composition) dedicated to a very special lady in the musician's life - his mum!

As for the three bonus tracks from Hamburg's Star Club: we're talking rock 'n' roll pure here, with 'Keep A Knocking', 'Margie' and the ultimate ballroom blitzer 'Rip It Up'.

This is a wonderful trip down memory lane and proof that rock 'n' roll will never die!

An interesting archive anthology from the ever-dependable Angel Air, chronicling the vinyl output of one of the forgotten heroes of British rock 'n' roll. Roy Young's penchant for homespun boogie-woogie spawned some excellent singles in the years before The Beatles came along and re-shaped the face of popular music forever, including an excellent re-vamp of Little Richard's 'Slippin' and Slidin'...

For all the jive of bonuses such as "Keep A-Knockin'" or the artist's own yelper "Big Fat Mama", the most infectious romps on offer arguably are "You Were Meant For Me" and "Gilee" which make it clear why Brian Epstein thought Young could blend in with his contract-searching moptop charges. Roy Young preferred to plough his individual furrow, and the history unjustly forgot the man who's still at it. Time to put him up there with the best of 'em. ****