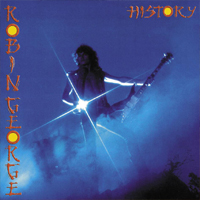 ROBIN GEORGE’s first major release was “The History” 12inch EP in 1983. The single “Go Down Fighting” did really well. He and his band were gigging and were about to become the new TRAPEZE when DAVE HOLLAND had an offer he could not refuse and he joined JUDAS PRIEST. The label decided not to pick up its option on the album and the masters have sat in the vaults until recently when Robin remastered them for the digital age.

MALCOLM DOME back in 83 had heard the early album demos which had been recorded between 1979 and 1981 and he jumped at the opportunity to write the sleeve notes for this 2014 release.

On the track “Showdown” PHIL LYNOTT plays bass. Robin George has had a distinguished career over the past three decades, working with a succession of major names. “History” is not a nostalgia trip. It’s a lesson in music for everyone.

...this is a worthy trip down memory lane for any fan of Robin George's music. Me I'm off to see if I can find my old leather jacket and pixie boots in celebration of the release of 'History'...

Re-mastered by Robin himself, 'History' has been kept as an honest appraisal of its time, a little tape hiss and abuse of the sound-limiters in evidence. However, don't let that put you off experiencing the 'History' of one of the U.K.'s most under-sung Melodic Rock songwriters in his most honest, raw form.

This new release unearths a body of work recorded some 30 years ago that until now had never seen the light of day. The album mixes rock, pop, funk, reggae for an experience that would've been right at home somewhere in between the radio rock of Foreigner and stadium-pop reggae of UB40 in 1980. While this may not exactly sit well with metal or reggae traditionalists, there's no denying the craftsmanship and guitar work on numbers like 'Go Down Fighting' and 'She Really Blew My Mind.'

The quality lifts with the arrival of Ocean Colour Scene, quickly followed by Lane's musical associates Slim Chance, who ably shift into knockabout form for Pistol Glen Matlock taking the vocal lead and The Clash's Mick Jones doing his best guitar posing on a touching version of The Face's 'Debris' and suitably raucous 'You're So Rude'.

...the development of an obviously talented musician, his equally talented surroundings and the makings of the future rock artist, bluesman and master arranger are all there, even at such an early point. I think this one is for us oldies, but most aspiring musicians or rock fans have a lesson coming here.

Some of the tracks such as 'Heartline' would be rejigged by George when he was launched as a solo artist by Arista in the mid-80's so the listener gets to enjoy an early version of this often overlooked pop rock classic.

History supplies a tuneful vehicle for the Wolverhampton born musician's inventive brand of music-making, with 'Heartline' and 'Go Down Fighting' emerging as the cream of an undemanding crop.