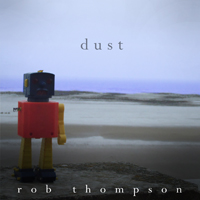 ROB THOMPSON is a gifted singer/songwriter and guitarist from Swansea, South Wales. Rob first found international success as a founder member of the critically acclaimed band The STORYS whose debut album in 2003 he co wrote and produced.

Sir ELTON JOHN impressed by the band invited them to be initially special guests on his UK tour and Rob with The Storys went on to tour not only UK but Europe and Scandinavia for the next 2 years. This experience and growing band following led to further support slots with acts as diverse as SUSANNE VEGA, SANTANA, VAN MORRISON to sharing stage with JOE WALSH,STEVE WINWOOD and BILL WYMAN.

‘Dust’ is Rob’s debut solo album and his wonderful evocative songs showcase not only his abilities as a lead singer but also his unique and widely acclaimed guitar playing skills.

With 'Dust', Rob presents classy rock which is both effective and exciting, and not too far from the progressive worlds. If at first glance its music resembles the Lloyd Cole of the '80s, it also evokes the Alan Parsons Project of those same years, or the David Bowie of the previous decade. The excellent 'The Director's Cut' is the album's highlight alongside the title track and the final track 'The Ending Credits', featuring enjoyable and orgasmic piano/guitar interplay...to complete his project, Rob called on producer Tim Hamill and two ex-Storys - bassist Andy Collins (who co-wrote two tracks) and Alan Thomas on keyboards. Without revolutionizing the genre, Dust remains a pleasant album to listen to.

One of Angel Air's most impressive, progressive sounding pop/rock albums of the last year...

Don't go expecting the Storys though as this is much more guitar led and many times reminded me of Dave Gilmour's solo albums, most notably for some of the jaw dropping guitar solos. Check out 'The Director's Cut' which features some wonderful guitar solos - never too hurried and flowing nicely throughout the album. 4.5/5

If you're a fan of Rob Thompson's work in The Storys then you're definitely going to want to pick up a copy of Dust...

Like The Storys, it becomes more gripping the more attention you give it...

...wonderful evocative songs showcase not only his abilities as a lead singer but also his unique and widely acclaimed guitar playing skills...

The singer/songwriter from Swansea in South Wales has delivered a beautiful album, Dust, which is crammed full of emotion and enough superbly crafted songs to leave you desperately seeking more...For once Dust is well worth collecting.

It's a quality creation: catchy, dramatically evoked and well performed...