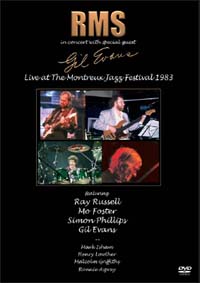 RAY RUSSELL, MO FOSTER, and SIMON PHILLIPS aka RMS flew in from London and GIL EVANS flew in from New York. Montreux looked beautiful. That evening, further inspired by the beautiful music of Herbie Hancock who preceded them on stage – the band played a wide ranging collection of titles, running from the gamut of HENDRIX to GERSHWIN. Everyone had a ball. And, as the final chord of “Gone” died away, Gil shook his clasped hands above his head-boxer like-his familiar gesture: “we got there”.

RMS – Ray Russell, Mo Foster and Simon Phillips – three musicians who know that the only true accolade is the admiration of one’s peers. Whether in the studio or live they have, between them,worked with major artists as diverse as JEFF BECK, GIL EVANS, STANLEY CLARKE, WHO, TINA TURNER, PHIL COLLINS, JACK BRUCE, GERRY RAFFERTY, CAT STEVENS, JOAN ARMATRADING and GEORGIE FAME

I realize that this recording is from 15 years ago (hard to believe,eh?) but this is stupendous ...What a tone on both fretted and fretless!

...it will probably appeal to jazz lovers who are more bothered about the performance than the stage show...

...challenging and uncomprising yet still maintaining that rocky edge...anyone who enjoys jazz will get a great del out of this.

Although it's been tucked away on the shelves for some time, the RMS concert will appeal to fusion fans and lovers of Gil Evans alike.

The nice songs run 90 minutes in all, so expect extended jams. The musicianship is top rate, though so many of these Jazz concerts are. This title will also interest fans of film music as Isham began a film scoring career the year of this show...

A thrilling multi-camera documentation of a concert given by RMS and Gil Evans at the 1983 Montreau Jazz Festival. Rather than just being mere archival footage, this is a top-notch filming of an incredible concert. The quality of the sound and video is amazing, especially considering that this was shot over 20 years ago...

Not only is the musicianship top notch from start to finish, but the video editing is virtually flawless... A truly excellent presentation. (Rating: 5+)

While we anticipated more focus on Gil Evans, the core figure of this performance is guitarist Ray Russell. This is not a bad thing as Ray leads the solos in a full-featured fusion concert from 1983 at Montreux. There are also brief but notable appearances from Mark Isham (t, keys), Henry Lowther (t), Malcolm Griffiths (tb) and Ronnie Asprey (sax). It is a good performance with great video shots of performers.

It's too bad this ensemble never made a lasting impression, as the original tunes here are pretty hot fusion as wella s laid back tasty jazz fare...These guys could really rip when they wanted to, but most importantly the music is always highly melodic...This is a solid and enjoyable DVD for fans of jazz fusion music...Kudos to Angel Air Waves for unearthing this from the vaults.

...RMS was a full-on fusion group the likes of which one would expect in 1983-funky fast rhythms, churning electric bass, atmospheric Fender Rhodes and, of course, lightning-fast, mathematically precise guitar leads.

And though it comes across as dated in 2006, it is sincere and not terribly overwrought. The guest horn section is a treat as it features two marvelous players in trumpeter Henry Lowther and trombonist Malcolm Griffiths. But when Evans guests on the Hendrix and Gershwin, the performance becomes special and the music more thoughtful. 'Gone, Gone, Gone,' one of Gershwin's best melodies, is the show's standout.