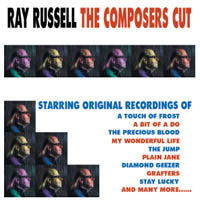 RAY RUSSELL is a star in the eyes of musicians across the world. Over four decades JOHN BARRY, TINA TURNER, PHIL SPECTOR, VAN MORRISON, ART GARFUNKEL, BRYAN FERRY, JACK BRUCE, CAT STEVENS, PHIL COLLINS, ALEX HARVEY, GEORGIE FAME, CLIFF RICHARD, MAGGIE BELL, FRANKIE MILLER are but a few of the artists and producers who have known that Ray would add something special to their work.

A lesser known side of Ray’s work shows that from ‘A Bit Of A Do’ to ‘A Touch Of Frost’, many of UK televisions best loved shows are uplifted by Ray’s music and his compositions.

Original TV themes from a man who is content that the World outside music knows his work, without necessarily knowing him. This release from Angel Air hopefully will change all that.

Largely orchestrated, or with keyboards, while others are more jazzy or blues; the tracks are often moody and atmospheric. Music appears here from shows including Frost, Plain Jane, Diamond Geezer, A Bit Of A Do, My Wonderful Life, Remembering 911, The Quest and others...Well packaged and annotated. ***

...marvelous tracks, the majority of which combines classical music and jazz influences into subtle, gentle movements; one is plainly witty ("A Bit of a Do"); and a few others, such as the bluesy "The Blue Room," provide a wider glance into Russell's all-around musical territories.

There are 21 different pieces here...show the diversity of his work

Take a trip down memory lane with this collection of TV themes that have all been blessed with the magical musical touch of Ray Russell.

It's an impressive body of work spanning the period 1982 to 2005 and the sheer variety of melody and sounds in this collection confirms Ray Russell as one of the foremost UK composers working in television.