RAY RUSSELL – Ready Or Not 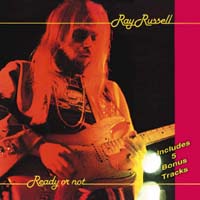 This is 1977 and RAY RUSSELL having started his musical career playing with George Fame & Blue Fames then appeared in the musical HAIR where he met ALEX HARVEY, formed with Alex ROCK WORKSHOP and released two ground breaking albums. He was then working as an arranger and producer at DJM Records. Ray then got the opportunity to record his solo album “Ready Or Not” which is now re-released on CD for the first time with bonus tracks.

Today Ray composes music for Film and TV (Touch Of Frost) but his musical career has meant that along with his friends MO FOSTER and SIMON PHILLIPS, both of whom appear on this CD, that between them they have worked with major artists as diverse as JEFF BECK, GIL EVANS, The WHO, TINA TURNER, PHIL COLLINS, GERRY RAFERTY, CAT STEVENS, JOAN ARMATRADING and JUDIE TZUKE.

KAPLAN KAYE who was A&R Manger at DJM in 1977 said recently “I am delighted this CD is being released as it as stood the test of time and is a testament to Ray’s undoubted talents as a Guitarist, Arranger and Writer”

It is a remarkably good piece of work. It's definitely rock but with a very soulful and funky edge...The mixture of original material and covers is just about right...all in all this is a fine album well worth further investigation

...a dynamite set whose contents wander through a clutch of tight Russell originals, and onto visionary covers of “The Clapping Song” and Stevie Wonder’s “Living For The City.” Five bonus tracks, meanwhile, include two distinctly alternate versions of “The Clapping Song,” and a terrific "groove mix” of the album’s “Sweet Surrender.”

It is very much an album of its time, with jazz rubbing shoulders with orchestration...there are times...where Ray shows himself in an extremely positive light...

If you are looking for some nice guitar, then look no further...Ray's guitaring is a pleasure to listen to...there are 24 musicians in all contributing to this splendid music...Music to time travel to!